False teachers do not go out to win the lost but to kidnap them, and greater so if they kidnap believers in Christ.

Why do Your disciples transgress the tradition of the elders?

The KJV has "the rudiments of the world," spoken of as "philosophy and vain deceit"; these were presented as superior to faith in Christ; at Colossae the worship of angels, mentioned in v. 18, is explicable by the supposition, held by both Jews and Gentiles in that district, that the constellations were either themselves animated heavenly beings, or were governed by them. In ancient Greece, this word meant "the elemental spirits of the universe, the angels that influenced the heavenly bodies." It was one of the words in the vocabulary of the religious astrology of that day. Of all the methods that people used to predict the future by technical methods, astrology has been the most persistent among civilized people. It is also likely the oldest since it was practiced by the sons of Ham, championed by Nimrod, and likely one of the uses of the Tower of Babel.

Elementary principles: The gnostics believed that the angels and the heavenly bodies influenced people's lives.

Paul's warnings to the Colossians about "new moon" and other religious practices determined by the calendar (COL 2:16) may be related to this gnostic teaching, though the Jewish people also watched the calendar (GAL 4:10).

These festivals, rituals, many of which included astrology were evil and satanic and those who practiced them were in the business of kidnapping both believer and unbeliever.

It is interesting to note that the false teachers did not ask them to forsake Christ, but rather to incorporate Christ into their system, thus making him a false Christ.

There is no need to change Christ, since He is the fullness of deity;  or the position of the believer, for in Christ the believer is totally complete.

COL 2:9For in Him all the fulness of Deity dwells in bodily form,

This is a direct attack against the Gnostics since they also used the word pleroma (fullness) for the emission of God to man in the stages of the spirits they worshipped. One climbed from one spirit to the other until he reached pleroma, which was the highest he could go. Christ is the pleroma.

COL 2:10and in Him you have been made complete, and He is the head over all rule and authority;

"fulness" - pleroma (n). "complete" - pleroo (v; perfect passive) = to fill, or to complete. Nothing needs to be added to our position in Christ.

No "yeah buts" you are complete and completely filled in Christ. Don't yeah but this thinking about your spiritual growth. Spiritual growth only teaches you to live in your position. There is nothing that needs to be added. The scale is full. The reaction is complete. The sum is totaled. The work is finished. Your soul, heart, and brain are only catching up with who you are in Christ and you will learn to think and live as the person you always were since salvation.

And you are in Him, having been completely filled full with the present result that you are in a state of fullness, in Him who is the Head of every principality and authority, [Expanded Translation by Kenneth S. Wuest]

Spiritual growth is nutrition and not addition. We are given the new divine spirit as well as God the Holy Spirit at the moment of salvation. The doctrine is transforming the mind, soul, and heart into conformity with who we are in Christ. Nothing will separate us from the love of God.

Learning doctrine brings the thinking of the believer into harmony with his position in Christ:

know the love of Christ which surpasses knowledge, that you may be filled up [pleroo] to all the fulness [pleroma] of God.

The reality of our fullness in Christ as new creatures is realized in life when we know the divine, virtue love of Christ.

False teaching has come into the Church in order to deceive believers from this fact. The false teaching, like that which threatened the Colossian church, is always centered on fallen humanity rising up to some mystical plane that doesn't actually exist, yet where angels abide, but to angels who abandoned their original domain under God. False teaching is centered on humanity or angels and not the new humanity that only functions in union with Christ. No false doctrine is Christ centered and grace oriented.

The false teaching that threatened the Colossian church was made up of several elements: Oriental mysticism, astrology, philosophy, and Jewish legalism.

It is the latter element that Paul dealt with in this section of his letter. Apparently, the false teachers insisted that their converts submit to circumcision and obey the Old Testament Law.

Gnostic legalism was not quite the same as the brand of legalism practiced by the Judaizers whom Paul refuted in his Epistle to the Galatians. The Jewish teachers that Paul attacked in Galatians, insisted that circumcision and obedience to the Law were necessary for salvation.

(See Acts 15 for some background on this problem.)

And some men came down from Judea and began teaching the brethren, "Unless you are circumcised according to the custom of Moses, you cannot be saved."

Gnostic legalism: If one is circumcised, observed right diet, and observed the  holy days he would be a spiritual elite in the church.

Gnostic legalism said that the Jewish Law would help the believers become more spiritual. If they were circumcised, and if they watched their diets and observed the holy days, then they would become part of the "spiritual elite" in the church. Unfortunately, we have people with similar ideas in our churches today.

Paul made it clear that the Christian is not subject in any way to the Old Testament legal system, nor can it do him any good spiritually. Jesus Christ alone is sufficient for our every spiritual need, for all of God's fullness is in Him. We are identified with Jesus Christ because He is the Head of the body (COL 1:18) and we are the members of the body (1CO 12:12-13). Paul explained our fourfold identification with Jesus Christ in verses 11-15 that makes it not only unnecessary, but sinful for us to get involved in any kind of legalism.

Circumcised in Him - cutting off the flesh (OSN).

Alive in Him - figurative baptism - identified with Christ.

Free from the Law in Him - Law nailed to Cross.

COL 2:11and in Him you were also circumcised with a circumcision made without hands, in the removal of the body of the flesh by the circumcision of Christ;

COL 2:12having been buried with Him in baptism, in which you were also raised up with Him through faith in the working of God, who raised Him from the dead.

Baptism is not water baptism. There is no amount of water that can cleanse a sinner.

Figuratively, baptism here refers to identification. This means that what happened to Christ has happened to the believer: crucified, buried, and resurrected.

He was crucified and buried and so was everything that was wrong with me - all my sin, the whole of my OSN, all my evil has been crucified and buried in a tomb. None of that will ever be raised, but in life, in a new humanity, a new spiritual species, a brand new creature in Christ, I am raised as well. The Law condemned the flesh and now the flesh is dead. Christ became a curse under the Law so my curse was lifted. Why in the world would I then go back to the Law!!!

COL 2:14having canceled out the certificate of debt consisting of decrees against us and which was hostile to us; and He has taken it out of the way, having nailed it to the cross.

"taken" - ai;rw[airo: perfect active indicative] = to lift, carry, take up or away. Perfect: taken away forever. Active: God through Christ carried it (all sin and the Mosaic Law) away.

In Bible days, financial records were often kept on parchment, and the writing could be washed off. The debt is canceled because Christ paid it in full.

As far as the east is from the west,

So far has He removed our transgressions from us.

Therefore, my brethren, you also were made to die to the Law through the body of Christ, that you might be joined to another, to Him who was raised from the dead, that we might bear fruit for God.

For sin shall not be master over you, for you are not under law, but under grace.

Picture a cross on Calvary that once held Jesus but is now void of Him but remaining nailed to it is a list of all your sins and the entire Mosaic Law. They are not there as a public display but as a sure revelation to you that all that was against you, all that was wrong with you, and all the wrong you ever have done or will do has been completely removed from you through Him. The shackles are off forever. The guilt and condemnation is gone forever. The only righteous Judge has publically pronounced you justified forever. Do you believe Him, do you believe this, or do you believe the idiot people who know nothing about it, or the fallen angels who violently oppose it?

And speaking of them...

COL 2:15When He had disarmed [war word] the rulers and authorities, He made a public display of them, having triumphed over them through Him.

Jesus had three great victories on the cross mentioned in this verse. First, He "disarmed the powers and authorities", stripping Satan and his army of whatever weapons they held.

He stripped satan and his army of whatever weapons they held. Satan cannot harm the believer who will not harm himself.

It is when we cease to keep our eyes on doctrine, the mind of Christ, and cease to be alert that the devil can damage our new lives through his trickery.

Second, Jesus "made a public spectacle" of the enemy, exposing Satan's deceit and vileness.

He exposed satan's deceit and vileness and his ultimate judgment.

In His death, resurrection, and ascension, Christ vindicated God and vanquished the devil.

He won a complete victory in triumph, released the captives, and thoroughly disgraced and defeated satan and his evil kingdom.

His third victory is found in the word triumph. Whenever a Roman general won a great victory on foreign soil, took many captives and much loot, and gained new territory for Rome, he was honored by an official parade known as "the Roman triumph." Paul alluded to this practice in his Second Letter to the Corinthians as we have recently studied. 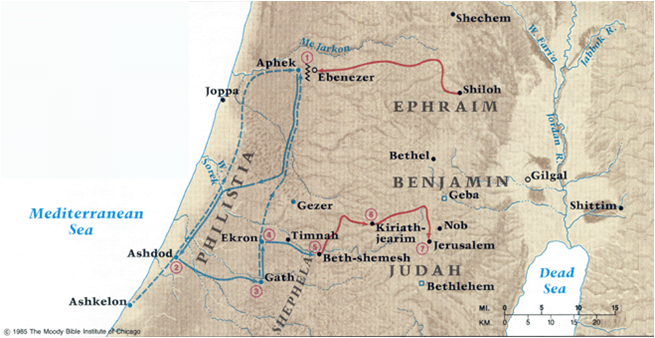