gods with the wisdom to heal - Thoth, Apis, Serapis, and Imhotep. God smote all with boils, including the priests. 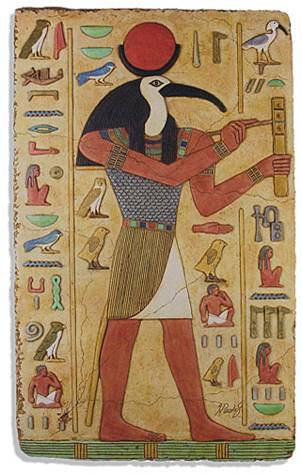 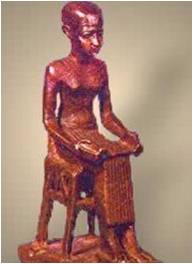 We can imagine all the people coming to the priests for healing, bringing their offerings for the various gods and all of them shown to be impotent. Moses brought on the plague by throwing ashes from a kiln up into the sky.

There were human sacrifices in the Egyptian religion, and it was the custom to take the ashes of these sacrifices and cast them into the air. Borne by the wind they floated over the milling populace who counted it a token of sure blessing to have some of the ashes fall upon them. Ashes are still used as a token of blessing in some religions. It is possible that Moses took the ashes from one such kiln.

Egypt is a very sunny land with hardly no rain. In the seventh plague God brought a tempest of lightning and fiery hail. Moses warned that all men and livestock not under cover would die and one of the Pharaohs servants feared the Lord and brought his possessions inside, but Pharaoh did not. The hail also destroyed all plants and trees. There was no weather in Goshen.

god of the wind - Shu; goddess of the sky - Nut [Shu's daughter]; god of the sky Horus. God brings lightning and fiery hail. 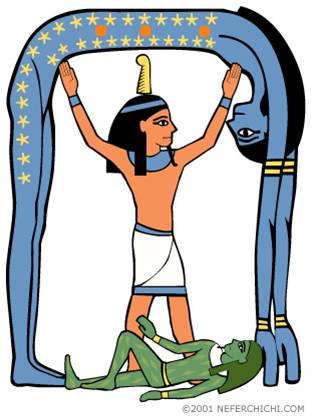 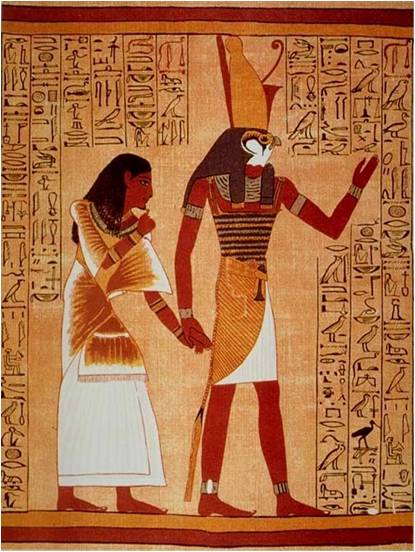 These people had never seen hail in their lives, never mind fiery hail.

Ernutet - goddess of the harvest. God brought locusts to take every leaf and twig that had escaped the hail.

EXO 10:7 And Pharaoh's servants said to him, "How long will this man be a snare to us? Let the men go, that they may serve the Lord their God. Do you not realize that Egypt is destroyed?"

Ra - the major deity, the god of the sun. God brought darkness that a person could feel.

It may be that God made so much moisture in the air that a wick could not be lit. This might explain the fact that it could be felt. But the children of Israel had light in their dwellings. The world of idolatry in darkness and God's people in light.

Christ went into the thickest darkness so that we could be children of light and be privileged to walk in the light.

Through His death and resurrection Christ brought eternal life to men as well as life abundantly in time and that removes all claims by false gods, i.e. demons, and all created things are put in their proper place.

Finally the Passover was given to Israel and the blood on the door would save the first born son. Whether that boy sat in the house at peace, knowing of the saving blood, or he sat in the house trembling with fear in doubt, death passed over the house. God did not say that if you're happy I'll pass over, but that if I see the blood I will pass over.

It would seem that this plague was not about defacing a false god but a giving of the gospel to the Jews.

EXO 12:12 'For I will go through the land of Egypt on that night, and will strike down all the first-born in the land of Egypt, both man and beast; and against all the gods of Egypt I will execute judgments —  I am the Lord.

We find out from various passages that the Israelites worshipped these idols and we especially see their attachment to them when they make the golden calf at Sinai in the form of Apis.

Idol worship centers around the things or events in life that people believe are important, desired, or needed.

The Egyptians based their gods on the earth, the Nile, and the sky. In modern times there are various things that people need to live that become idols, or greatly desire that become idols. The believer with some doctrine in his soul comes to know that he is alive only courtesy of the grace of God and so he loosens his grip on his old idol worship.

When the true God enters the life through faith, doctrine eventually replaces his idols, and some of these, which he has gripped very tightly, will only see their replacement with time.

Herein lies grace. God gives us the time to let go of those idols that we have held on to as we pursue the truths regarding His complete fulfillment of those areas in our soul that we secretly think the idol will suffice. In grace we still walk with Him despite our lack of perfection in the flesh.

Not that I have already obtained it, or have already become perfect, but I press on in order that I may lay hold of that for which also I was laid hold of by Christ Jesus.

God replaces what we thought was important:

But the Lord answered and said to her, "Martha, Martha, you are worried and bothered about so many things; but only a few things are necessary, really only one, for Mary has chosen the good part, which shall not be taken away from her. "

God becomes the only source of  that which we need:

And my God shall supply all your needs according to His riches in glory in Christ Jesus. Now to our God and Father be the glory forever and ever. Amen. \

God  becomes the only source of that which we desire:

Delight yourself in the Lord;

And He will give you the desires of your heart.

Commit your way to the Lord,

Trust also in Him, and He will do it.

As the word of God that is alive and powerful:

For the word of God is living and active and sharper than any two-edged sword, and piercing as far as the division of soul and spirit, of both joints and marrow, and able to judge the thoughts and intentions of the heart.

God influences the spirit of a man so that he may know himself in the light of God's will.

The spirit of man is the lamp of the Lord,

Searching all the innermost parts of his being.

We trust in God to reveal to us the areas of our heart where there exist desires, needs, and priorities that are not in alignment with His perfect will. Acknowledging a perverted system is not enough. Changes must be wrought. Acceptance of the correction and the will to change are all apart of humility.

All Scripture is inspired by God and profitable for teaching, for reproof, for correction, for training in righteousness; that the man of God may be adequate, equipped for every good work.

None of us ever arrive. We all have areas that need change. To think that we do not is put ourselves in a dangerous arena of arrogance.

Therefore let him who thinks he stands take heed lest he fall.

Israel would always weep bitterly when God pronounced their discipline, but so often, after the emotions died down, they did not change their hearts into alignment with His perfect will.

There are different gods in Canaan than there were in Egypt, but these are allowed to show themselves to Israel after they have witnessed the works of Jehovah.

1KI 11:2 from the nations concerning which the Lord had said to the sons of Israel, "You shall not associate with them, neither shall they associate with you, for they will surely turn your heart away after their gods." Solomon held fast to these in love.

1KI 11:3 And he had seven hundred wives, princesses, and three hundred concubines, and his wives turned his heart away.

1KI 11:4 For it came about when Solomon was old, his wives turned his heart away after other gods; and his heart was not wholly devoted to the Lord his God, as the heart of David his father had been.

1KI 11:5 For Solomon went after Ashtoreth the goddess of the Sidonians and after Milcom the detestable idol of the Ammonites.

1KI 11:6 And Solomon did what was evil in the sight of the Lord, and did not follow the Lord fully, as David his father had done.

1KI 11:8 Thus also he did for all his foreign wives, who burned incense and sacrificed to their gods.

Solomon made a treaty with Hiram the king of Tyre, which established a widespread commerce both by sea and land, through which ever increasing treasures of gold and silver, and other costly goods, were brought to the king. None of this was wrong for it was the fulfillment of God's promises to Solomon.

The Lord Himself had promised and had given Solomon wisdom, riches, and glory above all other kings for the glorification of his kingdom and so all Solomon had to do was follow Jehovah and reap the benefits. Yet Solomon began to look at these blessings differently. He began to look at them from the flesh.

When the blessings from God are perceived from the viewpoint of the flesh, the Giver can be forgotten and the gifts can become idols.

Solomon's accumulation of riches helped to nourish his inclination to a love of show, and created a kind of luxury which was hardly reconcilable with the simplicity of manners and the piety of a servant of God, so the foreign trade led to a toleration of heathen customs and religious views which could not fail to detract from the reverence paid to Jehovah.