Ephesians 6:17; The sword of the Spirit – resisting temptation

Sword of the Spirit: Gospel, defense, testimony, teaching, reproof, and correction properly used under the will of the HS.

The sword of the Spirit: defense - resisting temptation.

We probably all know the scripture “God is faithful, who will not allow you to be tempted beyond what you are able, but with the temptation will provide the way of escape also, that you may be able to endure it” (1CO 10:13). But to read it in context is to invoke the memory of the Exodus generation who through unbelieve would not enter into God’s rest. They were tempted in the wilderness and upon their failure to believe, they in turn tempted God.

For I do not want you to be unaware, brethren, that our fathers were all under the cloud, and all passed through the sea; 2 and all were baptized into Moses in the cloud and in the sea; 3 and all ate the same spiritual food; 4 and all drank the same spiritual drink, for they were drinking from a spiritual rock which followed them; and the rock was Christ. 5 Nevertheless, with most of them God was not well-pleased; for they were laid low in the wilderness. 6 Now these things happened as examples for us, that we should not crave evil things, as they also craved. 7 And do not be idolaters, as some of them were; as it is written, " The people sat down to eat and drink, and stood up to play." 8 Nor let us act immorally, as some of them did, and twenty-three thousand fell in one day. 9 Nor let us try the Lord, as some of them did, and were destroyed by the serpents. 10 Nor grumble, as some of them did, and were destroyed by the destroyer. 11 Now these things happened to them as an example, and they were written for our instruction, upon whom the ends of the ages have come. 12 Therefore let him who thinks he stands take heed lest he fall. 13 No temptation has overtaken you but such as is common to man; and God is faithful, who will not allow you to be tempted beyond what you are able, but with the temptation will provide the way of escape also, that you may be able to endure it.

We are to heed these lessons.

In the application of these lessons we can see the sword of the Spirit in action.

Vs.7 And do not be idolaters, as some of them were; as it is written, " The people sat down to eat and drink, and stood up to play."

We must be careful to understand that Aaron called the golden calf Elohim and Yahweh. To me, this means that they weren’t turning to Egyptian gods, but wanted a tangible thing that they could call Yahweh, and they also wanted to change Yahweh from the terrifying presence on the mountain in blazing fire, cloud, and whirlwind to the docile, quiet calf - still calling it Yahweh Elohim.

In the same way, our temptation to idolatry is not bowing down to the statue of a pagan god, but bowing to something that takes the place of the very real Provider, Giver, Redeemer, Lover, Father, Friend, Teacher, Comforter, Fulfiller, Empowering, and yes invisible God. It can be a think like drugs, alcohol, sex, wealth, power, recognition, etc.; or it could be a person; or it could be yourself; or it could even be a statue of some Christian saint or Mary or Jesus, as is sometimes done in Catholicism.

1) Idolatry - God is invisible, but His provisions show Him very near. Does He have to be tangible to be real?

The heart of idolatry is that we cannot be fulfilled and experience true joy with God who is invisible and intangible. This lie is one of the best because we live in a tangible world, but like all lies it gives us the opposite of the truth. Can joy only come from the physical, the tangible, the thing that actually stimulates our physical bodies and brains? It doesn’t take us long to realize that those things are fleeting and don’t really fill us. Only life walking with invisible God will give us true joy and fulfillment. And with that, we can enjoy our physical lives in just the way God commands us, never thinking that we need them, but are blessings to be enjoyed.

And if someone says that you’re just fooling yourself, tell them that the result has been true joy and a very real righteousness that does not seek its own, but loves sacrificially and experiences happiness when doing so. How could something unreal produce that? That is a function of the sword of the Spirit.

God is our very present Father, Brother, and Teacher with infinite love for us. Does He have to be tangible to be real?

Vs. 8 Nor let us act immorally, as some of them did, and twenty-three thousand fell in one day.

This is a reference to the infiltration of the Israelite camp with Midianite women. Balaam, a Midianite, failed to curse Israel, so he hatched plan B when he got home and sent young attractive women from his country to seduce the Jewish men so that God would curse them. It worked, but not to the extent that Balaam had hoped, and for his efforts, Balaam the diviner was run through with an Israelite sword not long afterwards.

2) Immorality - the risk of faith that chastity and temperance in all things while relying on God will satisfy turns out to be real and not fleeting like sexual immorality.

With God’s way and blessing there is a satisfaction that has weight. Weight is a definition of the word “worthy.” God’s satisfaction has weight and substance, while immorality is actually felt by us to be temporary, fleeting, and anticipatory of unwanted ramifications to come. If a person still has sensitivity in his conscience, he will feel the difference. God tells us to wait on Him. To risk faith in His way and deny ourselves daily of the sin that so easily entangles us and He promises, we will see and experience the weight of glory. Denial is not an end in and of itself. It is always commanded with a further goal in mind. “Lose your life … that you may find it.”

God promises far better than sin if we wait in patience for Him.

The end of a matter is better than its beginning;

Patience of spirit is better than haughtiness of spirit.

Instant gratification is offered, but if it is sinful, the truth of the word of God tells that something far better awaits us if we wait on the Lord and say no to the sin. Our confidence and desire to see the far greater blessings is the sword of the Spirit being used to destroy temptation.

Being with God in faith and thought, is being with infinite good and holiness, which is true pleasure to us, and it is not fleeting or unfulfilling as sexual immorality is.

Vs. 9 Nor let us try the Lord, as some of them did, and were destroyed by the serpents. 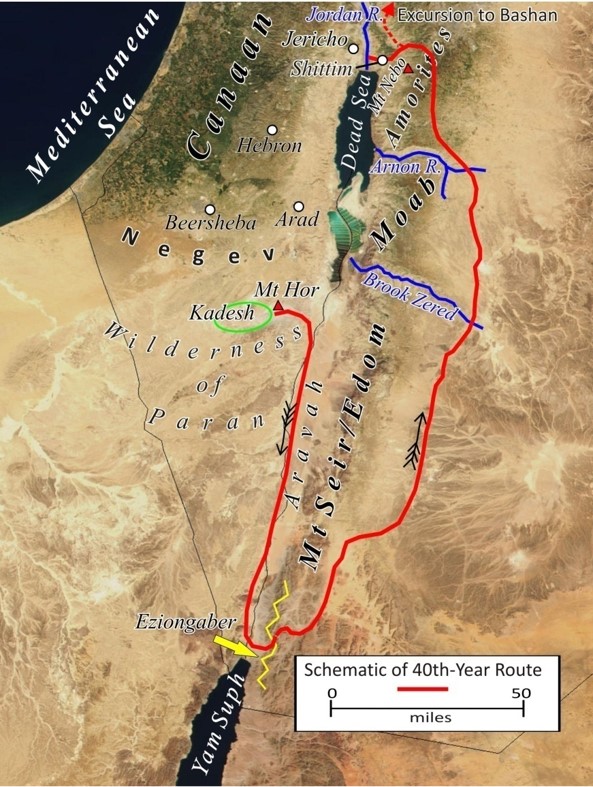 Edom would not let Israel go through, so they had to go around and walk through the very arid and harsh Arabah. We know that since they had to go around, that it extended their journey by at least two-fold, with the added bonus of the Arabah wilderness. When they grumbled, God sent upon them the fiery serpents, venomous vipers that live in that region whose bite stings like fire and is deadly.

3) Life seems harder - God promises to deliver us from all things and that the things are for our good and strength.

God will deliver us from all hardship and tribulation, and He will do so in miraculous ways that will teach us that when we are weak we are strong. The temptation here is to believe the lie that God has forgotten you, or isn’t watching, or doesn’t care. The lie suggests that God is not in control of every aspect of your life and that through this control He is not using everything to show you His glory and infect your life with His glory so that you mature in faith and strength and joy. The truth, as written by Peter, is: “to the degree that you share the sufferings of Christ, keep on rejoicing” (1PE 4:13). Sometimes God is going to send us the longer way and it will be much harder than the path we imagined we were going to take. This is a dangerous time for trying the Lord, and the next temptation, grumbling. Any complaint at any time is against God since He is in control of everything. We must remember that God chooses the path and we must have the faith and the courage to follow it with hope and expectation.

Like denial, suffering is not an end in itself. It has a goal in mind, which is the unfathomable strength of God in us. Everything in our lives is for the purpose of revealing God’s glory to us. This truth is the sword of the Spirit destroying the lie that God isn’t ordering everything in your life for your good. He is.

Returning to the Exodus, remember the deliverance that God provided for the impending death upon all who were bitten. They were only to look upon the bronze serpent that God instructed Moses to put atop a high pole. Jesus made clear that the serpent represented Him. All who believe in Him will never perish.

For consider Him who has endured such hostility by sinners against Himself, so that you may not grow weary and lose heart. 4 You have not yet resisted to the point of shedding blood in your striving against sin;

If/when we find ourselves trying the Lord, and complaining, look to the cross.

With our eyes fixed upon our suffering Lord, hanging by nails between heaven and earth, forsaken by His Father and being judged for our very sins in the worst agony imaginable, our complaints will seem piddling.

Vs. 10 Nor grumble, as some of them did, and were destroyed by the destroyer.

The destroyer is likely a destroying angel, as in the angel of death who destroyed the first-born in Egypt. With this interpretation, this would be a reference to all those who died in the wilderness, which outside of only Caleb and Joshua, was the entire adult population that left Egypt. They complained about seemingly everything that wasn’t easy or to their liking.

4) Complain about every unwelcome thing - God’s grace and blessings seen through faith makes us grateful people.

Thankfulness is fitting towards God rather than grumbling. Our complaining is a sure indication of ignorance and blindness to the great wonders of God’s mercy and providence.