The fact that all in the body of Christ are given at least one spiritual gift means that we have an inescapable responsibility to one another. This and several other things that reveal that what we do will inevitably affect others, reveals to us that our life is not our own.

Responsibility exceeds our reach. What we do has a ripple effect that touches others.

This needs to be understood as one of the many things that makes us cautious about what we do. Pleasing God, avoiding personal pain that comes from sin, avoiding discipline from God, glorifying God, fearing God, desiring to be what we have been called to be, and here, knowing that what we do will affect others.

The above statement was stated concerning parenting, and in particular to David’s affect upon his own children in the Bible, when he took Bathsheba and had Uriah, her husband, murdered. The effect of his actions upon his household was incredible.

One’s life is not their own. It belongs to God and is forever tied to others.

We return to our study of the gift of evangelism.

By way of review, we have seen Jesus as an evangelist during His first advent.

We have seen that the noun evangelist is only used three times in the NT and in none of those is any detail given as to what its function would look like.

We have seen that the verb “to evangelize,” or “to preach the gospel,” is used over fifty times, and we have looked at several of those.

We have noted how important the true gospel is in a world that is filled with false gospels, false Jesus’, and many false teachers with false doctrines.

The Lord told us that we will know them by their fruit. We will not be able, nor are we to try, to irradicate all the false teachers from the earth, rather we are to boldly preach and herald the gospel and the truth. We are to be unafraid to proclaim it; caring not for the persecution and insults they will throw at us, nor for their attempts at ruining our reputation, knowing well that the truth will always overcome when God sees fit.

Therefore, since we have this ministry, as we received mercy, we do not lose heart, 2 but we have renounced the things hidden because of shame, not walking in craftiness or adulterating the word of God, but by the manifestation of truth commending ourselves to every man's conscience in the sight of God. 3 And even if our gospel is veiled, it is veiled to those who are perishing, 4 in whose case the god of this world has blinded the minds of the unbelieving, that they might not see the light of the gospel of the glory of Christ, who is the image of God. 5 For we do not preach ourselves but Christ Jesus as Lord, and ourselves as your bond-servants for Jesus' sake. 6 For God, who said, "Light shall shine out of darkness," is the One who has shone in our hearts to give the light of the knowledge of the glory of God in the face of Christ.

This issue is an immense problem in our age. Lies of this type have always been, but they see to have gotten bolder.

The verb: often the one verb is translated, “preach the gospel.”

Certainly, that was proclaiming good news. Gradually the meaning of euaggelizo expanded. It was used of public political decrees or of private messages of a joyous nature. In the Greek world of pagan worship, the term acquired a religious-sacral significance in connection with an oracle.

The verb is used for Christ, Paul, and all of the early disciples who were scattered from Jerusalem by Saul’s persecution.

Therefore, those who had been scattered went about preaching (euaggelizo) the word.

Naturally, this doesn’t mean that they all possessed the spiritual gift of evangelism.

The writer of Hebrews uses it in reference to all whom he wrote to:

For indeed we have had good news preached (euaggelizo) to us, just as they also; but the word they heard did not profit them, because it was not united by faith in those who heard.

In every case where the verb is used, preaching is in view.

Nothing is implied about attracting large crowds or any other detail other than preaching the gospel.

There is nothing in the scripture to indicate that the evangelist draws large crowds. This has become tradition in the west, especially after the Great Awakening in America (1730’s and 1740’s) where Jonathan Edwards and George Whitefield preached fiery sermons to large crowds throughout the colonies. At one gathering before Whitefield, Ben Franklin was in attendance and Franklin estimated that there were roughly 30,000 in attendance. Whitefield had become quite popular and his outdoor sermons were advertised in advance. 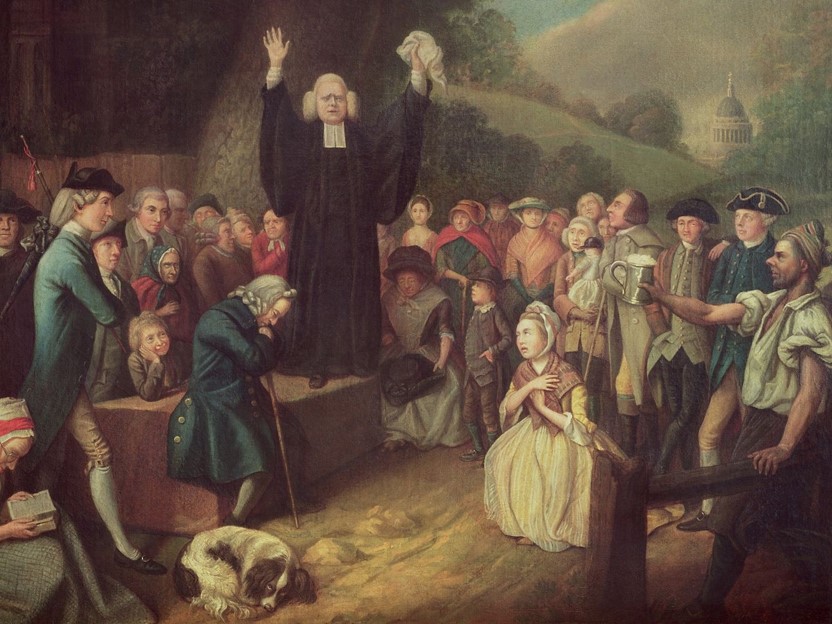 Evangelizing is the precious privilege of sharing that which delivers life from judgment to glory. It is not from man but from God.

For I would have you know, brethren, that the gospel which was preached by me is not according to man. 12 For I neither received it from man, nor was I taught it, but I received it through a revelation of Jesus Christ.

Walvoord: “Of primary importance in propagating the gospel is the gift of evangelism. By its title it is clear that this gift has reference to effective preaching of the gospel message to the unsaved, and as such it is to be compared to the teaching gift which gives instruction to the saved. I think we can safely say that Paul had both the gift of teaching and the gift of evangelist.” [The Holy Spirit]

G. G. Findlay, in his commentary on Ephesians, avoids much detail about the four gifts that Paul lists in EPH 4:11. After writing about the apostles and prophets, he sort of lumps evangelists and pastor teachers into one category as men given to the church from generation to generation to preach the gospel and teach the doctrines of the Scripture and so lead the church throughout these ages and through all the opposition and changes of society and places that it experiences. He moves from the general gifts of evangelist and PT to the gift of the apostle Paul himself who seemed to be an apostle, prophet, evangelist and shepherd/teacher all in one. Then he praises Augustine in a similar fashion, before moving on to Martin Luther and John Wesley. Now, mind you, this commentary was first published in 1891. He writes in the next paragraph:

“We are passing into a new age, such as none of these great men dreamed of, an age as exigent and perilous as any that have gone before it. The ascendency of physical science, the political enfranchisement of the masses, the universal spread of education, the emancipation of critical thought, the gigantic growth of the press, the enormous increase and aggregation of wealth, the multiplication of large cities, the worldwide facilities of intercourse, - these and other causes more subtle are rapidly transforming human society. Old barriers have disappeared; while new difficulties are being created of a magnitude to overtask the faith of the strongest. The Church is confronted with problems larger far in their dimensions than those our fathers knew. Demands are being made on her resources such as she has never had to meet before. Shall we be equal to the needs of the coming times? - Nay, that is not the question; but will He?

There is nothing new or surprising to the Lord Jesus in the progress of our times and the developments of modern thought, nothing for which He is not perfectly prepared. He has taken their measure long ere this, and holds them within His grasp. The government is upon His shoulders - “the weight of all this unintelligible world” - and He can bear it well. He has gifts in store for the twentieth century, when it arrives, as adequate as those He bestowed upon the first or fifth, upon the sixteenth or eighteenth of our era. There are Augustines and Wesleys yet to come. Hidden in the Almighty’s quiver are shafts as polished and as keen as any He has used, which He will launch forth in the war of the ages at the appointed hour. The need, the peril, the greatness of the time will be the measure of the gift of Christ.”

(I just ordered a first edition of this work and it cost … .90, shipping from the UK was .30). I think Findlay would be somewhat disappointed.