Addendums: Clarifying reading the Bible on your own: this can be problematic or very beneficial. It is beneficial when a person believes in its authority, sufficiency, necessity, and inerrancy. When such a believer comes across difficult passages or seeming contradictions, they know that there is a solution and will humbly explore it. When a person doesn’t believe in the authority and inerrancy of scripture, problem passages and seeming contradictions become a source of criticism and doubt. The issue when reading the Bible on your own is commitment to what it is as God’s Word, and then your time in the Bible alone, and yes in a good English translation, will be extremely fruitful.

Clarifying the reality that God has all things under control, but yet still not giving up on seeking whatever it is we can do to right the ship. In our study of wisdom, we focused mostly on what divine wisdom given to man is for and what it is not for. We learn from Solomon in Ecclesiastes and Job that there are things we cannot know and we shouldn’t pursue them, while we hotly pursue divine wisdom we can know. It is impossible not to think of the current climate in America when that principle is in mind. We know that God is sovereign and has all under control. That still doesn’t mean that we should be passive. I light of certain recent things that have been presented to me, I wanted to make sure that what I said in the past was not construed as pacifism. The church has a great impact on the nation it resides in. My goal recently was to free us from making an idol out of media and conspiracy theories. It was on my heart to warn us against replacing time and energy that is best used in serving and worshipping God with the pursuit of state-craft. That did not mean that there was no time for learning, pursuing, and influencing political, social, economic, geographic policies. My goal was biblically motivated to release anyone from worry, fear, anger, etc. that was hindering their peace and thus their day-to-day relationship with God. I try to leave aside all personal opinion and bias when I speak, and I’m not always successful at that. Some of us are more aggressive, some more passive, but we must all pursue the bond of peace and unity. Still, there is a clear attack on the freedoms that all Americans have enjoyed for hundreds of years. I don’t know exactly what we can do, except be the light of the world that Christ made us to be and influence with the truth all that are around us, but I also know that we should not passively let evil take over our communities, and what we do, whatever it is, must be in line with the scripture; only under God’s will.

Writing about the majesty and mystery of the doctrine of the Holy Trinity, A.J. Tozer states:

“Secularism, materialism, and the intrusive presence of things have put out the light in our souls and turned us into a generation of zombies.” [A.J. Tozer, Knowledge of the Holy]

This is one of the many reasons why we should have a consistent relationship with the word of God. How that translates into the frequency of your exposure, your schedule, is up to you. God does not tell us how often we should study His word, in a week say, nor for how long when we do. An honest assessment of your own relationship with God should tell you. We are to pray continually and we are to have full knowledge of His word, and those facts point to a very consistent exposure.

We must never lose the majesty of what God has done through Christ, and although this world is destined for destruction, it still contains the beauty of God’s creation, which is still as much a mystery to the science and technology spheres in this world as it always has been. The world also contains the true church (all born again believers), the Holy Spirit’s ministry to the unbelieving world, and the gospel.

Thomas Carlyle, “Science has done much for us; but it is a poor science that would hide from us the great deep sacred infinitude of Nescience (lack of knowledge), whither we can never penetrate, on which all science swims as a mere superficial film. This world, after all our science and sciences, is still a miracle; wonderful, inscrutable, magical and more, to whosoever will think of it.”

And, far beyond the wonder of the physical world, is the resurrected and ascended Christ who “fills all things.”

What is in Paul’s mind is not so much the descent and ascent in spatial terms, but rather the humiliation and exaltation that brought Christ to universal authority and power, “fill all things.”

(Now this expression, "He ascended," what does it mean except that He also had descended into the lower parts of the earth? 10 He who descended is Himself also He who ascended far above all the heavens, that He might fill all things.)

“Fill all things” [v. pleroo, n. pleroma] - Christ would/will fulfill all prophecy and covenants, down to the smallest detail.

The verb is pleroo, and the noun: pleroma. It is a simple word that means to fill. It also pertains to fulfilling or completing something, like fulfilling promises and covenants, and bringing something to completion. Paul uses the noun within this same thought that Christ gave gifts to His church when He ascended to heaven, pointing to their purpose.

And He gave some as apostles, and some as prophets, and some as evangelists, and some as pastors and teachers, 12 for the equipping of the saints for the work of service, to the building up of the body of Christ; 13 until we all attain to the unity of the faith, and of the knowledge of the Son of God, to a mature man, to the measure of the stature which belongs to the fulness [pleroma] of Christ.

“the fulness of Christ” - every part of our conscience, our lives, our conduct, our passion, our wisdom, etc., are in accordance with Him.

He fulfilled all the prophecy about His incarnation, from the virgin birth to His suffering and death. But the promises or covenants that God made with Israel and the world could only be “filled” (same Greek word is used) by the death, burial, resurrection, and ascension of Christ.

“Do not think that I came to abolish the Law or the Prophets; I did not come to abolish, but to fulfill. 18 For truly I say to you, until heaven and earth pass away, not the smallest letter or stroke shall pass away from the Law, until all is accomplished.”

Picture: smallest letter and stroke. The yod and the stroke are tiny marks that could easily be missed or uncopied or even added by mistake, but where God has put 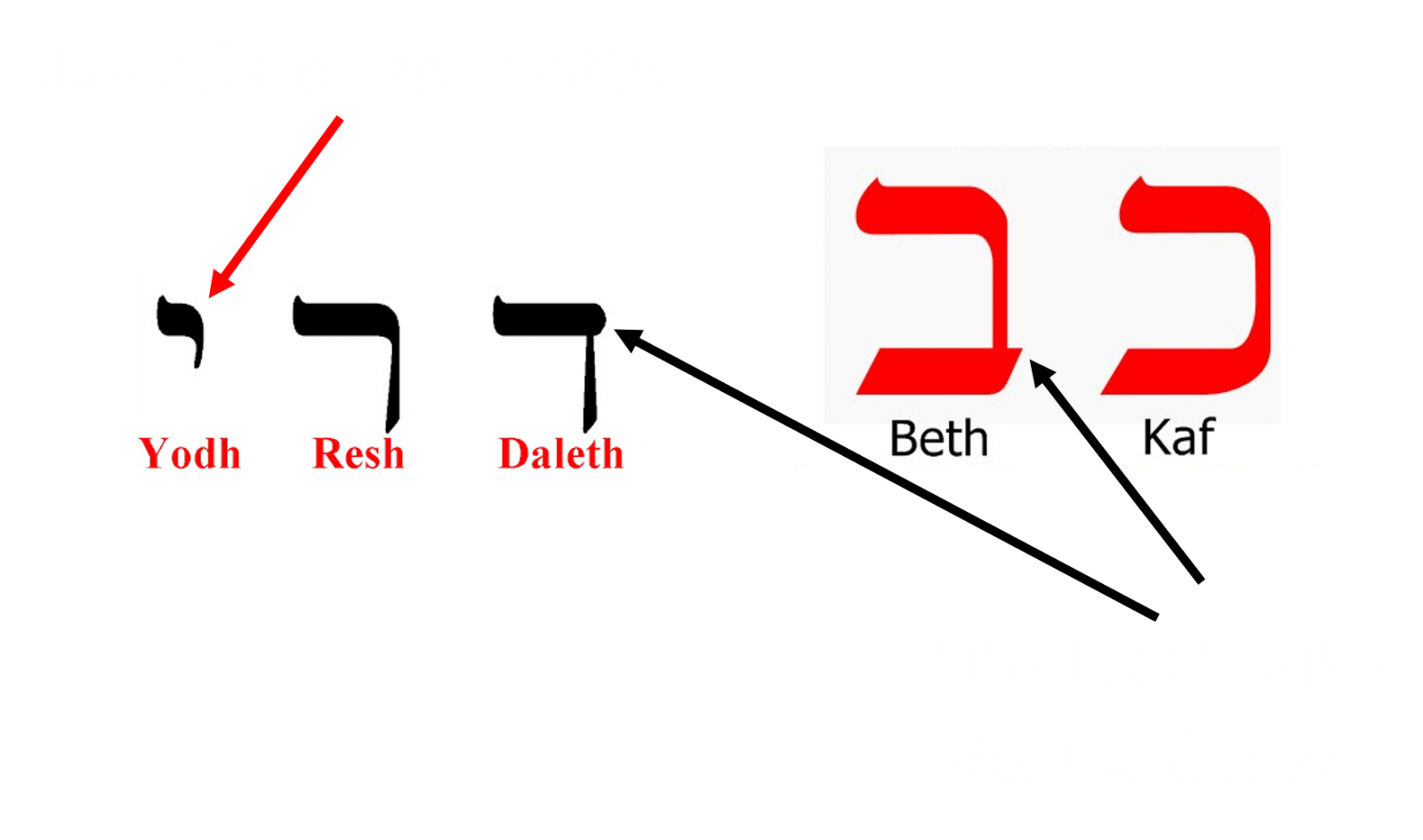 these tiny marks in His Word and which communicate particular revelation, shall be a part of His completed purpose. In other words, not the smallest part of any purpose or promise or covenant will go unfulfilled.