Ephesians 4:4-6, The one body, its variety, and God’s love that unites it.

We should not be so fascinated by the individual gifts that we forget the main reason why Paul listed them: to remind us that they unite us in our ministries to the one body.

In 1Co 12 and Rom 12, Paul is eager to apply the family-likeness which reflects Christ’s Lordship over all Christians to the diversity of ways in which this likeness can find creative expression. Whenever we see the different members of the Trinity acting in different capacities, we never imagine anything other than Their oneness. Even the virgin-birth of Jesus does not give any notion in our minds of anything other than a Trinity, coequal and coeternal, one.

The Trinity is the foundation of unity-in-diversity and diversity-in-unity.

Now concerning spiritual gifts, brethren, I do not want you to be unaware.

But one and the same Spirit works all these things, distributing to each one individually just as He wills.

The Holy Spirit bestows these gifts "as He will" (1CO 12:11), not as we will. No Christian should complain about his or her gifts, nor should any believer boast about his or her gifts. We are many members in one body, ministering to each other with the gifts that God alone chose to give to us.

In fact, Paul defines what counts as spiritual by talking about what God freely gives, on His own initiative, and in His own sovereign choice as empowerments through the agency of the Holy Spirit for practical service of God and of other persons.

When we think of anything spiritual, whether being spiritual or functioning in spiritual gifts in service of God and others, it is the function of God’s gifts given to us: the Word, the Holy Spirit, the spiritual gifts (charismata), the body of Christ, and all good things, they come from God above.

Every good thing bestowed and every perfect gift is from above, coming down from the Father of lights, with whom there is no variation, or shifting shadow.

John Calvin wrote of the 1Co 12 passage, “Men have nothing good or praiseworthy except what comes from God alone.”

One expositor calls this sentence the Trinitarian ground plan.

The most striking element of the statements by Paul made here is the one recurring word ‘same’. No one is to say that he has more of the Holy Spirit because he has more gifts. The same Spirit distributes the small or the large gift (for lack of any other way of describing “variety”), not because He favors one Christian less or more than another, but because of His sovereign purposes. God has sovereign purposes that overrule our personal desires. The Giver, not the gift, accomplishes anything. In this truth there is the foundation of many tests that we face where we have the opportunity to go the way of our own desire or to subject ourselves to God’s desire. From that perspective we may see that it is not so much a matter of having a gift as of being a gift.

1 Behold, how good and how pleasant it is

For brothers to dwell together in unity!

2 It is like the precious oil upon the head,

Coming down upon the beard,

Coming down upon the edge of his robes.

Coming down upon the mountains of Zion;

For there the Lord commanded the blessing —  life forever.

Unity in this psalm is depicted as a result of commonality. Brothers have the same father. In Israel all are of one father Abraham, have one high priest and one anointing oil, one source for the Jordan River, Mt. Hermon, one capital to which the pilgrims go at various times in the year in unity, to worship together in the one temple, to celebrate the one Passover before their shared one Lord God.

The dwelling together of the brothers is declared good. In that world brothers dwelt together, not necessarily in the same tent, but in the same camp to support one another in feeding, sheltering, protecting, and ministering to the spiritual needs of the whole family or clan.

The high priest, depicted here under the first of them, Aaron, immediately brings in the idea of the sanctuary and the sacrifice, leading us to think of the one Messiah.

Unity is from God as the high priest, the anointing oil, his robe, the priesthood, the Temple and the sacrifice are all from God.

The anointing oil was a special oil prepared for the sanctuary. Its formula was not to be copied by anyone outside the Temple’s function.

Israel was released from the bondage of Egypt together, all leaving as one people after celebrating the same Passover ritual and spreading the same type of blood over their doorposts after sacrificing the same type of lamb. They were not allowed to concoct their own ritual dinner, but all to follow the same ritual with the same foods and same unleavened bread.

Israel camped around the Tabernacle in the wilderness. 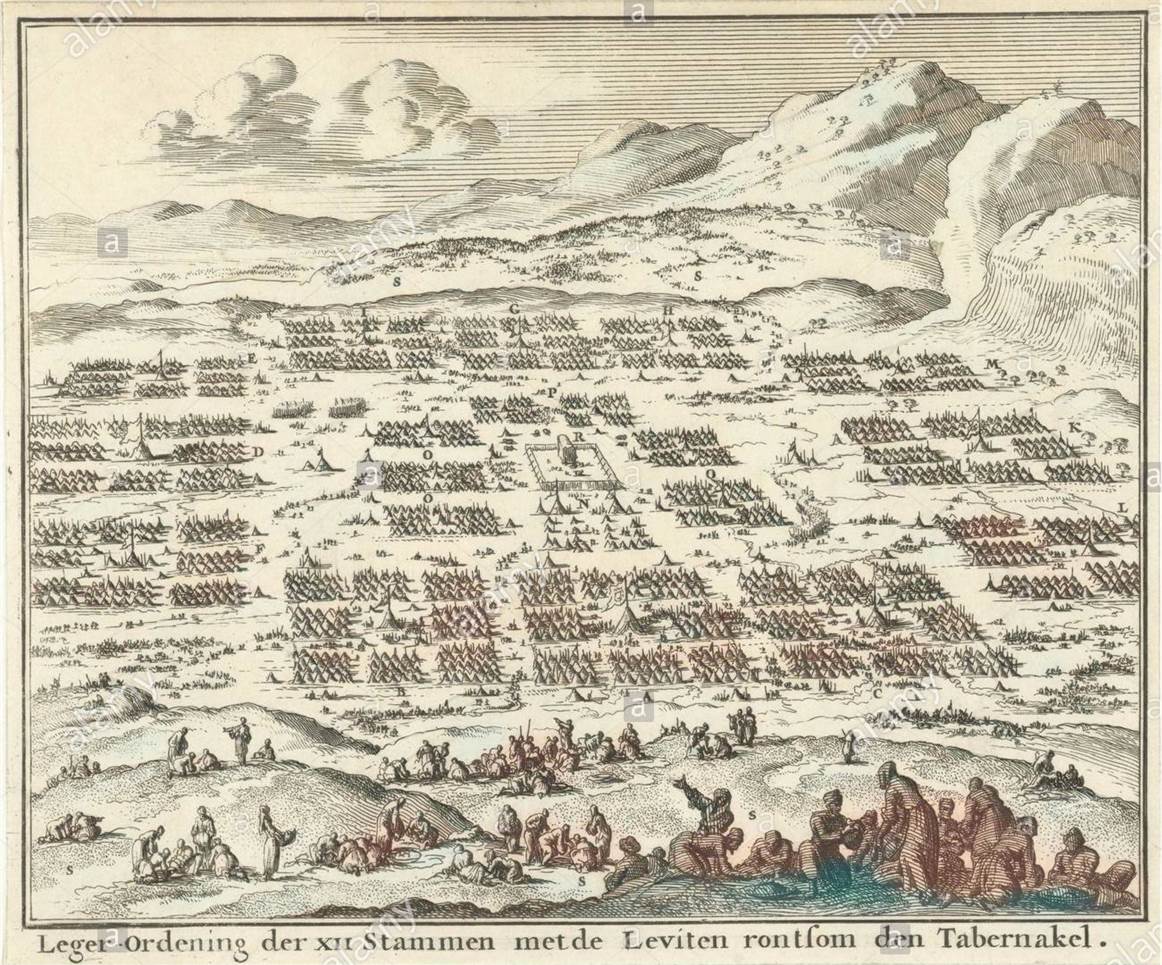 The oil was first used in the wilderness, where all the tribes camped in their order dictated by God around the Tabernacle. The unity of the tribes in a chaotic wilderness was based on the centrality of the sanctuary and the divinely imposed straight lines of east, west, north, south.

The second simile is the dew of Mt. Hermon. This 9,000-foot mountain is in the far north of the sand in an area that is known for its moist air, rain, and in the colder season, snow. The benefit of all this moisture, which we know well in the Willamette Valley, is lush greenery. The dew comes down Hermon, but we know that dew doesn’t descend down large mountains, but we do know that melting snow and rain water do flow down, and as God, the architect of the topography of the earth, would have it, Hermon is the source of the Jordan, which, like the oil on the head of the high priest, flows from the north of the nation to the south. It is a ribbon that runs through all of the nation of Israel, uniting her, and supplying her a lush portion, and greatest of all, baptizing the Messiah.

Mt. Hermon, the source of the Jordan River flowing down to Mt. Zion. 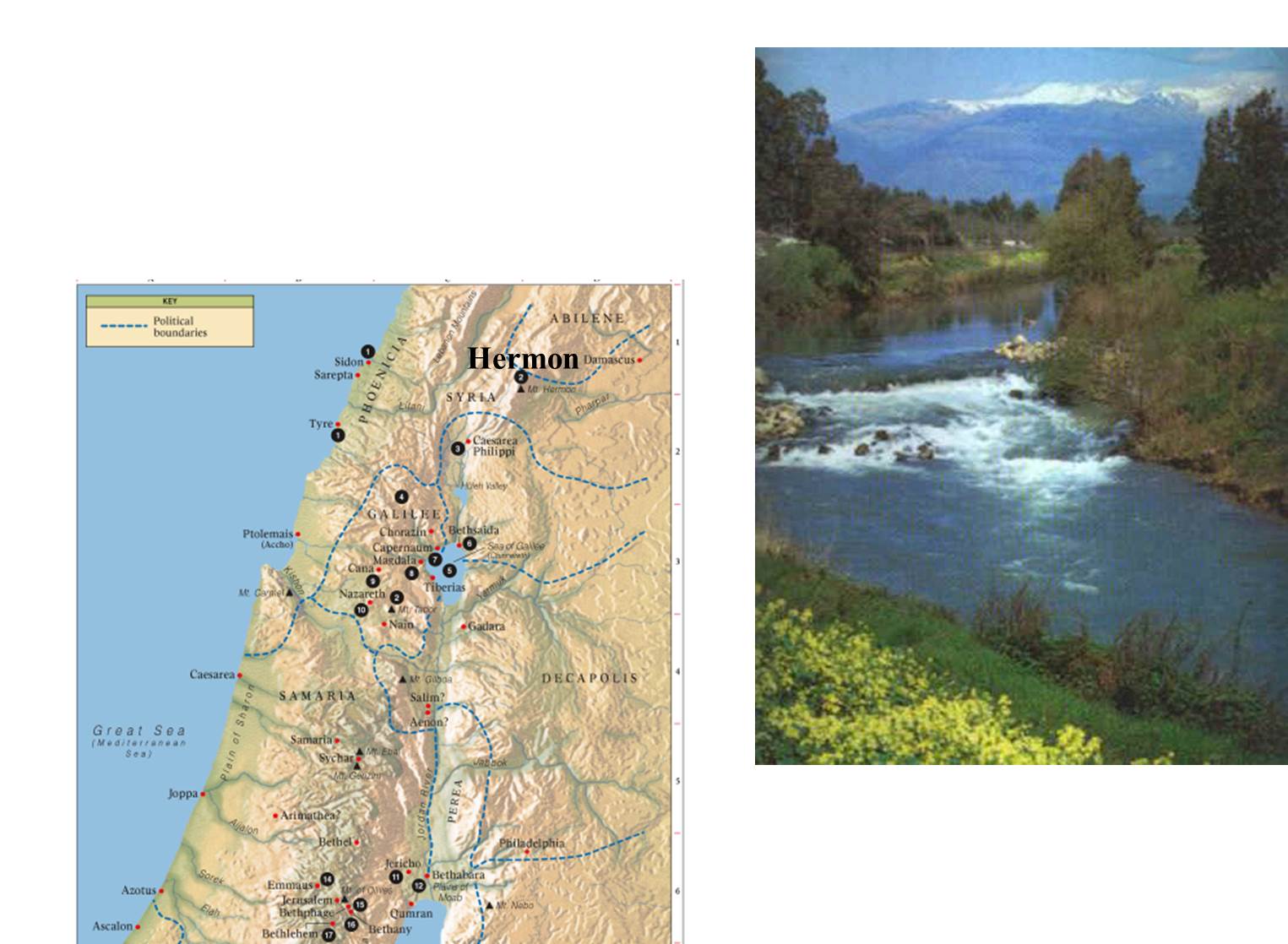 The Jordan doesn’t actually flow to Mt. Zion, but the image is one of north and south unified by one very important river. Joshua had to cross it, and did so miraculously by the power of God. As he did so, by divine instruction, he built a pillar of twelve stones on the bed in the middle of the river and then another pillar of twelve stones on the western bank, each stone being selected and inserted by a leader from each tribe, and thus depicting the unity and stability of the twelve-tribes. Yet, civil war would come and divide the nation into north and south during the reign of Solomon’s son.

1 Behold, how good and how pleasant it is

For brothers to dwell together in unity!

2 It is like the precious oil upon the head,

Coming down upon the beard,

Coming down upon the edge of his robes.

Coming down upon the mountains of Zion;

For there the Lord commanded the blessing —  life forever.

“There” on Mt. Zion, the Lord commanded the blessing - life forever. On Zion, where Abraham would sacrifice his son Isaac and the Father would sacrifice His Son Jesus, blessing is bestowed.

Any community where unity and harmony exists is praiseworthy on some level, but true harmony based upon the one source of all good blessing is dependent upon the Lord.

In the church age, the individual believer is the temple of God, yet God has provided the local church in a similar capacity to the ancient Temple, in that it is a place where people can come together to worship God, pray, celebrate the Communion; blessings that bring a common joy and brotherhood, or, brothers dwelling together.

The blessing of God brings a delightful and enriching unity to His people.

[from Allen Ross in his A Commentary on the Psalms] “Both testaments emphasize the importance of living in peace and harmony with others, most certainly others in the covenant. And that unity should be most evident as people gather in fellowship in the presence of the Lord to worship in common and to realize His renewed blessings. If the blessing of God is not the cause of unity, then there is little basis for it. But if that unity is from God, then it brings with it the responsibilities of a community.”