EPH 1:1 Paul, an apostle of Christ Jesus by the will of God, to the saints who are at Ephesus, and who are faithful in Christ Jesus:

EPH 1:2 Grace to you and peace from God our Father and the Lord Jesus Christ.

“apostle” - a)po/stol$ (apostolos) = one sent forth with orders, a delegate, a messenger.

Apostle occurs once as a descriptive designation of the Lord Jesus Christ.

HEB 3:1 Therefore, holy brethren, partakers of a heavenly calling, consider Jesus, the Apostle and High Priest of our confession.

HEB 3:2 He was faithful to Him who appointed Him, as Moses also was in all His house.

HEB 3:3 For He has been counted worthy of more glory than Moses, by just so much as the builder of the house has more honor than the house.

The Jews used the term shalych (from “to send”) to describe the person who presided over the synagogue. Moses was this to Israel and Jesus is this to the church.

Hebrews is written to Jews in the early church. The shalych directed all the synagogue’s officers and affairs. Moses presided over the synagogue of Israel and now Jesus does the same over the church, and with much more glory than Moses.

Therefore, this use of apostle for Christ points to Him being the Head of the church as well as the revealer of the Father to the church.

The One who gives authority to the apostle is Himself the Head of the church. This is said multiple times and in multiple ways in the NT, and in this passage, it is affirmed to the Jews of the early church, since the authority of Christ supersedes Moses who gave them the Law. He is our authority.

During His ministry, Christ sent the apostles to “preach the kingdom of God,” and he gave them power over unclean spirits and to heal diseases. We see both Peter and Paul possess these powers and we assume that the rest of the twelve continued to possess them as well as the church was established.

Once the church was established and the word of God completed and closed, there was no longer a need for the power of healing, prophecy, or tongues. Men only continue to claim them from lust and pride.

The apostles possessed the power to heal, cast out demons, speak in tongues, prophesy, etc. These gifts ceased once the church was established, however, the real power of the spiritual life, divine love, remained with all believers.

And I show you a still more excellent way.

1CO 13:1 If I speak with the tongues of men and of angels, but do not have love, I have become a noisy gong or a clanging cymbal.

1CO 13:2 And if I have the gift of prophecy, and know all mysteries and all knowledge; and if I have all faith, so as to remove mountains, but do not have love, I am nothing.

1CO 13:3 And if I give all my possessions to feed the poor, and if I deliver my body to be burned, but do not have love, it profits me nothing.

1CO 13:4 Love is patient, love is kind, and is not jealous; love does not brag and is not arrogant,

1CO 13:5 does not act unbecomingly; it does not seek its own, is not provoked, does not take into account a wrong suffered,

1CO 13:6 does not rejoice in unrighteousness, but rejoices with the truth;

He was God’s messenger and steward to the Gentile churches in Palestine, Asia, Macedonia, Achaia, Rome, and possibly even Spain.

There must be authority in every aspect of life, and the church especially. Yet authority must be ordained by God and men must not seek it for wrong reasons.

Power lust occurred quickly in the early church, by the second century it had its beginning inroad into her and by the fifth century it had weaved its way through almost all of her.

Not only did Satan will it so, and still does, but when there is a community of people who strongly believe something, there is the potentiality for much wealth and power.

A man in seminary once commented that people will give a lot of money to authenticity, and if you can fake that you’ve got it made.

1TI 3:1 not a new convert, lest he become conceited and fall into the condemnation incurred by the devil.

1PE 5:1 Therefore, I exhort the elders among you, as your fellow elder and witness of the sufferings of Christ, and a partaker also of the glory that is to be revealed,

1PE 5:2 shepherd the flock of God among you, exercising oversight not under compulsion, but voluntarily, according to the will of God; and not for sordid gain, but with eagerness;

1PE 5:3 nor yet as lording it over those allotted to your charge, but proving to be examples to the flock.

1PE 5:4 And when the Chief Shepherd appears, you will receive the unfading crown of glory.

1PE 5:5 You younger men, likewise, be subject to your elders; and all of you, clothe yourselves with humility toward one another, for God is opposed to the proud, but gives grace to the humble.

The apostle is commissioned to relate the message of the new order that had been established by Christ.

At Pentecost they were filled with the Spirit and endowed with special gifts.

The last apostle chosen (not Matthias who was drawn by lot) was Paul in the most remarkable way.

Treated at first with suspicion, Paul soon acquired influence and consideration in the circle of the apostles by his enthusiasm and then his direct calling from God to go to Cyprus on the first of his missionary journeys. Paul carried from there in every direction the Gospel into distant heathen lands, calling out and employing active associates, while leaving much of the conversions of the Jews to the others, notably Peter and John. 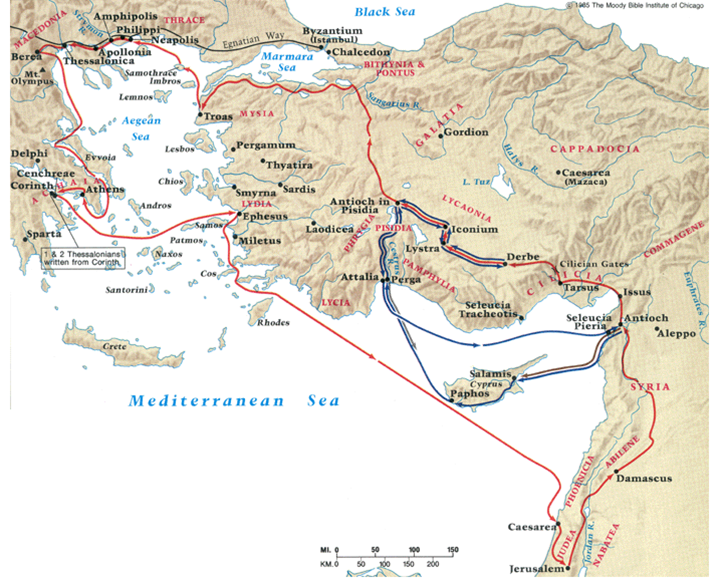 If we designate the first apostolic period to be in Jerusalem from Pentecost to the persecution (led by Paul himself), and designate the second apostolic period to be the evangelization of Samaria and the coast (Peter) and then Antioch, Paul’s ministry falls into the third period and dominates it. Peter gradually disappears from the record and John appears later, after Paul’s death, with his gospel, 1Jo, and Revelations.

Paul becomes the central character of the apostolic history in the third phase of the very early church. Thus, a man who had not personally known Christ during His ministry on earth accomplished more for Christianity than all the directly-appointed apostles in terms of the extent of the geographical region traversed, his intensity, and his writing (13 of the 27 books of the NT).

Paul combined structured doctrine with the heavenly gifts earned for the world by the death and resurrection of Christ. It is most remarkable that God called a Pharisee to fill this role in the infancy of the church.

Qualifications of an apostle:

1. They must have seen and heard the Lord.

ACT 1:21 "It is therefore necessary that of the men who have accompanied us all the time that the Lord Jesus went in and out among us —

ACT 1:22 beginning with the baptism of John, until the day that He was taken up from us —  one of these should become a witness with us of His resurrection."

They were called to do so much and what they did could not be in error. Their faith had to be unshakeable. We assume these to be some of the reasons why they had to see and hear the Lord.

The calling upon our own lives is not that of an apostle, but it is important, essential, and all-consuming of our lives. Though none of us have seen the Lord yet, we do see Him and hear Him from the pages of scripture.

The messengers from God are vital. We must all see the essential nature of our calling and let nothing stand in the way of realizing its complete fulfillment.