Joshua and Judges: Failing to appropriate God’s blessings by faith – the warning of Shiloh; Jos 17.

Title: Joshua and Judges: Failing to appropriate God’s blessings by faith - the warning of Shiloh; Jos 17.

There should not have been one uttering of complaint from the sons of Joseph for their land allotment. After all, they should know that God is in charge of the lottery. Rather they should have thanked Him for the opportunity to fight the remaining Canaanites that seemed to retain some strength.

JOS 17:14 Then the sons of Joseph spoke to Joshua, saying, "Why have you given me only one lot and one portion for an inheritance, since I am a numerous people whom the Lord has thus far blessed?"

JOS 17:15 And Joshua said to them, "If you are a numerous people, go up to the forest and clear a place for yourself there in the land of the Perizzites and of the Rephaim, since the hill country of Ephraim is too narrow for you."

JOS 17:17 And Joshua spoke to the house of Joseph, to Ephraim and Manasseh, saying, "You are a numerous people and have great power; you shall not have one lot only,

Joshua frustrates their excuses. He is a great leader and doesn't acquiesce to their weakness in order to be popular or liked. Just as misery loves company so does fear and laziness.

God has given each believer the strength to carry our His predetermined plan. He will not acquiesce to excuses, but He will encourage and comfort.

Joshua graciously repeats his encouragement that they are more than up to the task. It is clear that the sons of Joseph are filled with cowardice and possibly laziness and they are lacking in their trust of Jehovah to fulfill His promise.

JOS 18:1 Then the whole congregation of the sons of Israel assembled themselves at Shiloh, and set up the tent of meeting there; and the land was subdued before them. 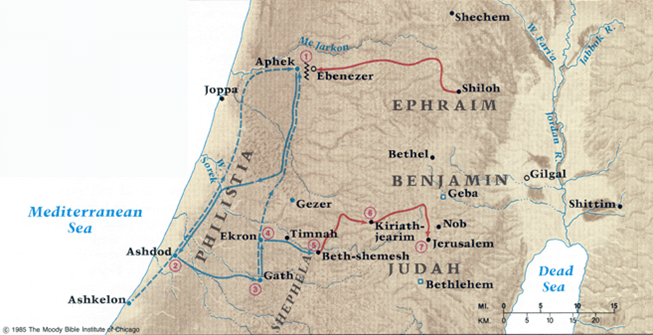 As soon as the tribe of Ephraim had received its inheritance, Joshua commanded the whole congregation to assemble in Shiloh (northwest corner of Ephraim), and there set up the tabernacle, in order that, as the land was conquered, the worship of Jehovah might henceforth be regularly observed in accordance with the law. The selection of Shiloh was not for the reason that it was more fit for a spiritual center than other places since there are many other places that would have been just as suitable.

The reason for selecting Shiloh is most likely due to its name.

The scepter shall not depart from Judah,

Nor the ruler's staff from between his feet,

And to him shall be the obedience of the peoples.

Shiloh appeared to be pre-eminently suitable to be the resting-place of the sanctuary of the Lord, where His name was to dwell in Israel, until He should come who was to give true rest to His people as the Prince of Peace. In any case, however:

Joshua did not follow his own judgment in selecting Shiloh for this purpose, but acted in simple accordance with the instructions of God.

The lesson here is that we don't choose the geographic will of God for our lives. We may want to, but if we are in the wrong place then God will reveal it. Normally Christians don't up and move by divine revelation, but in some cases it happens. Usually it is just the comfort of knowing that we are in the right place. This only becomes the concern of the positive, spiritual believer. The negative believer has deeper problems than the possibility of being in the wrong place.

The Lord had expressly reserved to himself the choice of the place where His name should dwell.

DEU 12:10 When you cross the Jordan and live in the land which the Lord your God is giving you to inherit, and He gives you rest from all your enemies around you so that you live in security,

DEU 12:11 then it shall come about that the place in which the Lord your God shall choose for His name to dwell, there you shall bring all that I command you: your burnt offerings and your sacrifices, your tithes and the contribution of your hand, and all your choice votive offerings which you will vow to the Lord.

Whether Shiloh was chosen through direct revelation from God to Joshua, by the high priest, or through the Urim and Thummim is not stated, nor is the reason given for the timing of the move. It seems strange that they would move before all the land allotments were determined, but we may be able to deduct something.

Seven tribes are dragging their feet in taking their land and it may be that the transport and set up at Shiloh was now made so that they would understand that Israel was no longer journeying, and it was about time that they took the land for themselves.

The tabernacle would remain at Shiloh through the entire time of the judges up to the time of the monarchy, but the place would eventually be destroyed due to the apostasy of the people.

Shiloh was God’s first dwelling place among the people, but due to the idolatry of Israel, God would later destroy it as He had done to Jerusalem.

Just Jerusalem is a sad place to some who stand and pray and the Wailing Wall, so too often the blessings of God become tragedies in people’s lives. Christ is the perfect example. He is the world’s greatest blessing but to those who reject Him, He becomes the source of ultimate judgment.

Too often in people’s lives the great blessings of God are turned to tragedy through ignorance and want.

The first issue of their virility in the tents of Ham.

And guided them in the wilderness like a flock;

But the sea engulfed their enemies.

To this hill country which His right hand [power] had gained.

PSA 78:55 He also drove out the nations before them,

And He apportioned them for an inheritance by measurement,

And made the tribes of Israel dwell in their tents.

He certainly did make them take the measurement of land that they were given. Seven tribes are not taking their land, but rather settling for the same nomadic life they’ve always had. God sets up at Shiloh and by so doing He gives a clear sign that it’s time to move in.

PSA 78:56 Yet they tempted and rebelled against the Most High God, And did not keep His testimonies [time of the judges],

PSA 78:57 But turned back and acted treacherously like their fathers; They turned aside like a treacherous bow.

The imagery of the treacherous bow is the bow that is poorly made, is not calibrated by a master bow-maker, and so it never shoots straight. The arrow always misses the mark, which is a strict definition of sin.

PSA 78:58 For they provoked Him with their high places,

And aroused His jealousy with their graven images.

PSA 78:60 So that He abandoned the dwelling place at Shiloh,

The tent which He had pitched among men,

PSA 78:61 And gave up His strength to captivity,

And His glory into the hand of the adversary.

PSA 78:62 He also delivered His people to the sword,

And was filled with wrath at His inheritance.

And His virgins had no wedding songs.

And His widows could not weep.

The Christian who fails to: 1TI 6:12 Fight the good fight of faith; take hold of the eternal life to which you were called, is not killed by sword, but fails to see the blessedness of life.

Whereas the nation of Israel found defeat on the battlefield the believer who fails to take hold of that which is life indeed, finds defeat in life.

JER 7:1 The word that came to Jeremiah from the Lord, saying,

JER 7:2 "Stand in the gate of the Lord's house and proclaim there this word, and say, 'Hear the word of the Lord, all you of Judah, who enter by these gates to worship the Lord!'"

Jeremiah stood in one of the gates of the temple during one of the great annual feasts and spoke this to the people as they were coming in and going out.

JER 7:3 Thus says the Lord  of hosts, the God of Israel, "Amend your ways and your deeds, and I will let you dwell in this place.

“The temple of the Lord” is repeated three times in order to emphasize it. The people seemed to think that their worship was secure in the stones and buildings of the temple complex. Hence, God would have it destroyed.

God doesn’t desire to dwell in stone but in men’s hearts so that they may take hold of life.

that Christ may dwell in your hearts through faith;

It’s not the building or the statue or the sunset or anywhere else that constitutes anyone’s worship and closeness to God. It is only in your own heart that he must dwell and fellowship with you and from there, within you, where you worship Him.

JER 7:5 "For if you truly amend your ways and your deeds, if you truly practice justice between a man and his neighbor,

JER 7:6 if you do not oppress the alien, the orphan, or the widow, and do not shed innocent blood in this place, nor walk after other gods to your own ruin,

In other words, if you love your neighbor as yourself.

JER 7:7 then I will let you dwell in this place, in the land that I gave to your fathers forever and ever.

JER 7:8 "Behold, you are trusting in deceptive words to no avail.

JER 7:9 "Will you steal, murder, and commit adultery, and swear falsely, and offer sacrifices to Baal, and walk after other gods that you have not known,

JER 7:10 then come and stand before Me in this house, which is called by My name, and say,' We are delivered!' —  that you may do all these abominations?

JER 7:11 "Has this house, which is called by My name, become a den of robbers in your sight? Behold, I, even I, have seen it," declares the Lord.

JER 7:12 "But go now to My place which was in Shiloh, where I made My name dwell at the first, and see what I did to it because of the wickedness of My people Israel.

By this time Shiloh was destroyed. Archeology reveals to us that it was burnt to the ground.

JER 7:13 "And now, because you have done all these things," declares the Lord, "and I spoke to you, rising up early and speaking, but you did not hear, and I called you but you did not answer,

JER 7:14 therefore, I will do to the house which is called by My name [temple], in which you trust, and to the place which I gave you and your fathers, as I did to Shiloh.

JER 7:15 "And I will cast you out of My sight, as I have cast out all your brothers, all the offspring of Ephraim.”

Every life, no matter their genetics or background or upbringing can have a life of victory in Christ or can be a tragedy. There is no middle ground. Because of this, every person is a very real testimony to the grace of God, whether he accepts it or rejects it.