Joshua and Judges: The allotment of the land, part 47 - Predestination - Liberty of God's glory.

Title: Joshua and Judges: The allotment of the land, part 47 - Predestination - Liberty of God's glory.

Conclusion to Christian liberty: The Christian is free to do, but what is he free from?

All true freedom has this double aspect. In slavery all doors are closed and the person is a slave to his place. But when freed from his place he is now not only free from the burdens of that place but is free to do things in realms where he has never walked. The door that held him in slavery is thrown open by Christ and he finds many other doors are now open. Will he follow Christ through them all?

The Christian is free from the bondage of sin. Worse than physical slavery is the bondage of a convinced sinner when he is brought to feel the burden of his guilt like a crushing weight.

Sin is washed away, there is no more burden of guilt, and no more pain of regret. Christ has removed the burden and we are light as a feather.

I feel a compulsion to entreat you not to become familiar with this truth but then I wonder how any believer who knows the blessedness of forgiveness ever could.

PSA 32:1 How blessed is he whose transgression is forgiven,

Whose sin is covered!

PSA 32:2 How blessed is the man to whom the Lord does not impute iniquity, And in whose spirit there is no deceit!

The Christian is free from the penalty of sin. At physical death there will not be judgment but a moving on into eternal bliss.

There is no condemnation on the believer. He will not be punished. Divine discipline is not punishment. It is help and love. The believer can walk boldly through his life without fear. He will never be judged by God for his sins.

Christ stood before you with shining and brilliant white clothes and you in dirty tattered rags. His presence made you ashamed of your appearance and then Christ took off His clothes and handed them to you and said put them on. He in turn took your clothes and bore them upon Himself for a time. In His eyes you are always dressed as He is. You are in Him. Would anyone who understood this desire to rush headlong into the mud to dirty the clothes given him by Christ? Freedom from guilt is not, as some believe, a motivation to sin, but in fact a rejection of it.

The Christian is free from the dominion of sin. Sin is no longer his master. He is free to walk in righteousness.

The believer eats, sleeps, and breathes the grace of God. He is not transforming himself or attempting to improve himself. What bondage that was to us all before our Lord freed us from it. By the grace of God, the Spirit of God, Christ, and the word of God are all in me to exact a life that is pleasing to God and my steps are numbered by the Lord without the immense burden of sin upon them. Though still a sinner, in grace I recover without guilt and continue my journey with the Holy Spirit to the destination that He has determined.

Without the grace of God, the gifts from God used by the believer, his attempt at sanctification would be like Sisyphus' attempt to move his rock to the top of the hill. 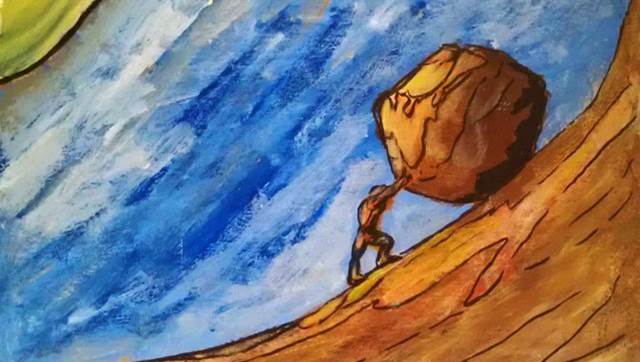 The Christian is free from slavish fear to the law. He will work out of love for the work and not due to fear of punishment.

Many people are honest because they are afraid of the policeman. Many are sober because they are afraid of the eye of the public. Many persons are seemingly religious because of their neighbors. If a man is destitute of grace all his works are of slavery. He does what he does to be noticed by men or to not be punished by God. There is no joy is such work, but the believer is free from these chains as well.

Do we thank God for a gift because we fear that if we don't we won't get another one? Do I do righteous deeds in order to be rewarded by God and to get some crown in heaven? Such people would have loved not to do the work if they could. They see righteousness as slavery and sin as liberty.

The Christian is free from the fear of death. The most bitter cup has been made sweet.

O death, where is your sting? It is gone in Christ. Death is only a slightly narrow door which we walk through to enter heaven and the presence of our Lord. It is a thin veil and on the other side is you Savior on His throne awaiting you. There nothing to fear in it. It is a welcome friend.

The Christian is free to follow Christ in life, in conduct, in wisdom. He is now free to do what was before impossible.

You are free to all that is in the Bible. There is not a promise or a word in it that is not yours.

The context would point to the Lord as referring to Jesus and that He is the Spirit. Christ would state that He and the Father are One. We certainly understand Him to be one with the Holy Spirit as well. The Trinity as the one true God has accomplished our liberty or freedom. Christ set us free. The Father gave Him the plan for freedom. The Spirit writes the glory of that freedom on our hearts. We are free from ignorance and from what the types of the OT concealed. We are free to speak boldly. We are free from sin, condemnation, and death forever. We are free to entrust our entire lives to the glory of God and know that we will be ultimately glorified in heaven.