JOS 14:12 Now then, give me this hill country about which the Lord spoke on that day, for you heard on that day that Anakim were there, with great fortified cities; perhaps the Lord will be with me, and I shall drive them out as the Lord has spoken."

Any who remain in Hebron are severely weakened, yet Caleb still relies upon the Lord to drive them out.

Caleb doesn't flex the power of himself and his people who alone could have easily driven out the remaining Anakites and any others who were still dwelling there, but he chooses rather to call on the power of the Lord. The remaining people are so weakened that Caleb might have concluded that Jehovah wasn't needed, "You can sit this one out God, I got it."

No matter how weak the foe may seem, we are to never rely upon our own power. The battle, no matter how small, is always the Lord's.

JOS 14:13 So Joshua blessed him, and gave Hebron to Caleb the son of Jephunneh for an inheritance.

JOS 14:14 Therefore, Hebron became the inheritance of Caleb the son of Jephunneh the Kenizzite until this day, because he followed the Lord God of Israel fully.

JOS 14:15 Now the name of Hebron was formerly Kiriath-arba; for Arba was the greatest man among the Anakim. Then the land had rest from war.

Chapter 15 - the lot cast for the distribution of the land to Judah in the south. By God's providence Caleb was not separated from his tribe. The only weak point is that the Jebusites could not be cast out of Jerusalem.

Under the superintending providence of God, the inheritance which fell to the tribe of Judah by lot was in the southern part of Canaan, where Caleb had already received his inheritance, so that he was not separated from his tribe.  This shows without a doubt that God is in control of the lot and it is not arbitrary. The inheritance of Judah is first of all described according to its boundaries (vv. 1-12); then for the sake of completeness it is stated once more with regard to Caleb, that he received Kirjath-arba for his inheritance, and took possession of it by expelling the Anakites and conquering Debir (vv. 13-20); and after this a list is given of the towns in the different parts (vv. 21-63).

The Jebusites will not be driven out until David does it four hundred years later.

The sons of Judah captured the city and burned it with fire in JUD 1:8, but they were not able to drive out all of the Jebusites. It is likely that the Jebusites had constructed a large fortress on the mount of Zion and had retreated there. Such a fortress has been found in archaeological digs, which fortress protected and underground spring. It's walls are 23 feet thick, made up of blocks that are up to ten feet wide.

Chapter 16 - The descendants of Joseph drew one lot. The one territory was divided in which Ephraim received the south and Manasseh the north.

The inheritance of the half tribe of Manasseh was not to be separated from that of the tribe of Ephraim as they were Joseph's sons.

The chapter gives the boundaries of their land and then adds their failure to remove the Canaanites.

JOS 16:10 But they did not drive out the Canaanites who lived in Gezer, so the Canaanites live in the midst of Ephraim to this day, and they became forced laborers.

Chapter 17 - the allotment to Manasseh. Among the six families, one had no sons, only daughters, and they receive their father's inheritance.

JOS 17:5 Thus there fell ten portions to Manasseh, besides the land of Gilead and Bashan, which is beyond the Jordan,

JOS 17:6 because the daughters of Manasseh received an inheritance among his sons. And the land of Gilead belonged to the rest of the sons of Manasseh.

They requested this from Moses years ago and it was given to them. They come before the committee and repeat the promise and the land is granted to them. This shows God's mercy and fairness.

There are a few cities mentioned that Manasseh could not take and the Canaanites continued to live there. When the tribe became stronger they enslaved them but did not destroy them.

JOS 17:12 But the sons of Manasseh could not take possession of these cities, because the Canaanites persisted in living in that land.

JOS 17:13 And it came about when the sons of Israel became strong, they put the Canaanites to forced labor, but they did not drive them out completely.

Next we have the complaint of the sons of Joseph.

JOS 17:14 Then the sons of Joseph spoke to Joshua, saying, "Why have you given me only one lot and one portion for an inheritance, since I am a numerous people whom the Lord has thus far blessed?"

The complaint of the sons of Joseph. It is unfounded and they are scared of the Canaanites that still inhabit the land.

There was no real ground for this complaint. As Ephraim numbered only 32,500 and Manasseh 52,700 at the second census in the time of Moses (Num 26), and therefore Ephraim and half Manasseh together did not amount to more than 58,000 or 59,000, this tribe and a half were not so strong as Judah with its 76,500, and were even weaker than Dan with its 64,400, or Issachar with its 64,300 men, and therefore could not justly lay claim to more than the territory of a single tribe.

division of the land 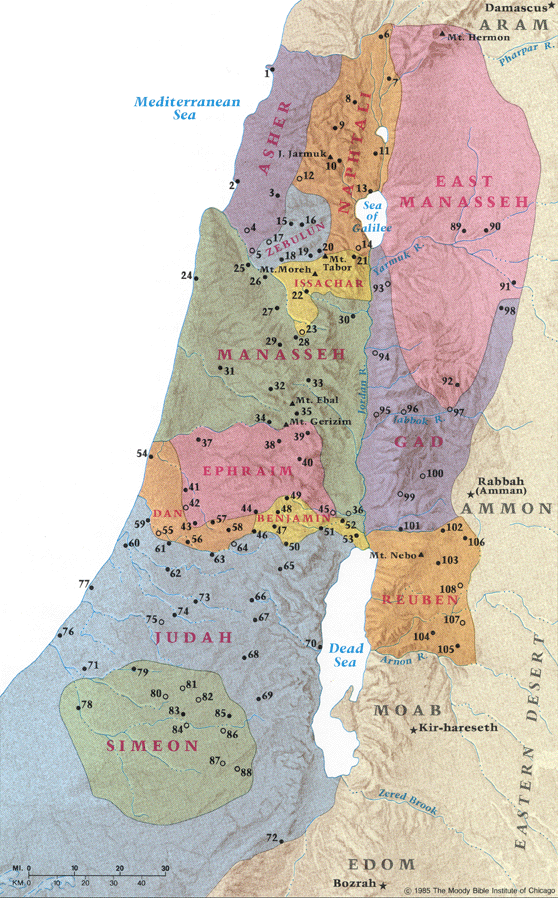 Moreover, the land allotted to them was in one of the most fertile parts of Palestine. For although as a whole the mountains of Ephraim have much the same character as those of Judah, yet the separate mountains are neither so rugged nor so lofty, there being only a few of them that reach the height of 2500 feet above sea level; moreover, they are intersected by many broad valleys and fertile plateau, which are covered with fruitful fields and splendid plantations of olives, vines, and fig trees. On the west the mountains slope off into the hill country, which joins the plain of Sharon, with its invariable fertility. "The soil here is a black clay soil of unfathomable depth, which is nearly all ploughed, and is of such unusual fertility that a cultivated plain here might furnish an almost unparalleled granary for the whole land. Interminable fields full of wheat and barley with their waving ears, which were very nearly ripe, with here and there a field of millet, that was already being diligently reaped by the peasants, presented a glorious sight." [Ritter]

The contrast between these sons of Joseph and Caleb is brought out. Caleb also had to remove those who were reputed to be giants (Anakim) and the terrain he had to deal with is much more rugged. Caleb can’t wait to get at it while Ephraim and Manasseh hem and haw about facing the enemy and petition for another plot of land.

It would seem that the real reason for the complaint was that the land was still inhabited by Perizzites and Rephaim (reputed to be unusually large men).

We see self-justification in action. They have convinced themselves that they need another plot because they are many, when actually their tribes are smaller in number than their neighbors. Their excuse attempts to hide the real reason for their fear, which they refused to face. If they had just faced their fear in rational faith in God’s promise, they would have overcome it and glorified God while simultaneously strengthening their faith.

So often, fear prevents us from doing something which would produce wonderful results.

JOS 17:15 And Joshua said to them, "If you are a numerous people, go up to the forest and clear a place for yourself there in the land of the Perizzites and of the Rephaim, since the hill country of Ephraim is too narrow for you."

Joshua wisely takes their excuse for another plot and turns it around as an asset for the plan that God has given them.

The Rephaim are renowned to be unusually large people.

For only Og king of Bashan was left of the remnant of the Rephaim. Behold, his bedstead was an iron bedstead; it is in Rabbah of the sons of Ammon. Its length was nine cubits [13.5 ft.] and its width four cubits [6 ft.] by ordinary cubit.

It was as wide as a California king size bed and almost twice as long.

It seems that some of the Rephaim settled in the west and affiliated with the Philistines and it is possible that Goliath [9 ft. tall] is a descendent of them.

We each are assigned an individual and tailor made plan. Within it are battles, large and small, that we are to face. To complain, think we got short changed, or to envy the plan of another is to deem that plan as less than perfect.

Perfect God can only create perfect plans. They contain battles that will challenge our faith, and this is exactly what they are designed to do. It is good for the sons of Joseph to fight against and drive out the large men descended from Rephaim. Think about the increase in courage and faith it will give them when they see their success.

Our plans are tailor fit for us. Within them are lessons and faith builders that will only work for us. The very hairs of your head are numbered, meaning that God knows exactly what we need, and much more than we ourselves know. We are to fight the battle in front of us and not look to the left or to the right for alternative plans or lesser battles.

Predestination is the work of God the Father before the foundation of the world for every Church Age believer to execute God’s plan, purpose, and will for his life. It is for believer's only.