1SA 15:24 Then Saul said to Samuel, "I have sinned; I have indeed transgressed the command of the Lord and your words, because I feared the people and listened to their voice.

1SA 15:25 Now therefore, please pardon my sin and return with me, that I may worship the Lord."

This was only repentance of the lips arising from fear of losing the kingdom and incurring public disgrace.

It was not true and serious repentance, or the result of genuine sorrow of heart because he had offended God, but was merely repentance of the lips. He did not fear God properly. His conscience led him to secure his lofty position and the approbation of the people.

Godly sorrow is clearly shown in the scripture.

This in no way means that a believer has to feel sorry for his sins in order to be forgiven. We are forgiven solely due to the substitutionary spiritual death of Christ which propitiated the Father's justice. Nor does it mean that we have to feel sorry in order to be restored to fellowship. The proper response and timing of godly sorrow cannot be defined. It is often the natural response of a believer who has realized that he has neglected the spiritual life that was graciously given to him.

Saul's worldly sorrow will certainly bring death upon him.

From this same selfish motivation, Saul let the people have what they wanted figuring he could deepen the foundation of his kingship by pleasing the people.

This is obvious because he will ask Samuel in vs. 30 to return with him to the elders of the people and honor him before the elders. He knows that without Samuel's backing, many of the elders will no longer be behind him. He now cares more about the position of king than he does about the Lord.

1SA 15:26 But Samuel said to Saul, "I will not return with you; for you have rejected the word of the Lord, and the Lord has rejected you from being king over Israel."

1SA 15:28 So Samuel said to him, "The Lord has torn the kingdom of Israel from you today, and has given it to your neighbor who is better than you [because he will be a man after God's heart].

Because God doesn't change you have Someone that you can trust.

A man's repentance or regret arises from his changeableness, from the fluctuations in his desires and actions. This is never the case with God.

1SA 15:30 Then he said, "I have sinned; but please honor me now before the elders of my people and before Israel, and go back with me, that I may worship the Lord your God."

1SA 15:31 So Samuel went back following Saul, and Saul worshiped the Lord.

Samuel follows, but not so he can honor Saul before the elders, which he will not do, but so he can fulfill the ban on the king of the Amalekites.

1SA 15:32 Then Samuel said, "Bring me Agag, the king of the Amalekites." And Agag came to him cheerfully. And Agag said [likely to himself], "Surely the bitterness of death is past."

1SA 15:33 But Samuel said, "As your sword has made women childless, so shall your mother be childless among women." And Samuel hewed Agag to pieces before the Lord at Gilgal.

A similar situation arose in Israel in the time of Moses. Just before the nation was to cross the Jordan, as they were camped out on the east side, they were tempted with Moabite and Midianite women who worshipped Baal, and some of the men succumbed to them.

After Balaam was unsuccessful in cursing Israel, he devised this plan in order to bring cursing upon them from Jehovah.

"Behold, these caused the sons of Israel, through the counsel of Balaam, to trespass against the Lord in the matter of Peor, so the plague was among the congregation of the Lord."

NUM 25:7 When Phinehas the son of Eleazar, the son of Aaron the priest, saw it, he arose from the midst of the congregation, and took a spear in his hand;

JOS 11:10 Then Joshua turned back at that time, and captured Hazor and struck its king with the sword; for Hazor formerly was the head of all these kingdoms.

JOS 11:11 And they struck every person who was in it with the edge of the sword, utterly destroying them; there was no one left who breathed. And he burned Hazor with fire. 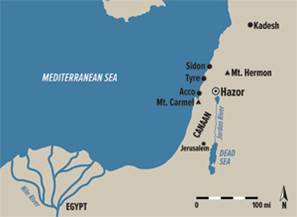 The Israeli archeologist Yigael Yadin began the excavations at the 175 acre site of Hazor in 1955. He says:

"There is evidence of a massive destruction. I once called it the mother of all destruction. In Hazor, wherever you come down to the end of the Canaanite strata, you come upon this destruction. It is an unbelievable destruction … it left behind a thick debris of ashes. There was a terrible fire in the [Canaanite] palace. So much so, that the bricks vitrified and some of the clay vessels melted [and] some stones exploded because of the fire … We can clearly say that the temperature was more than 1200 degrees centigrade. A normal fire is half, about 600 or 700 degrees, [but in the afternoon] the wind is unbelievable … put these … together and you'll get this kind of fire [with] very intense heat."

ceremonial palace and bronze statue of a king found in it. 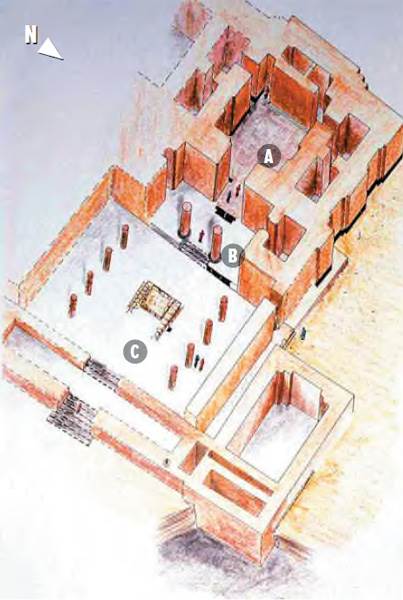 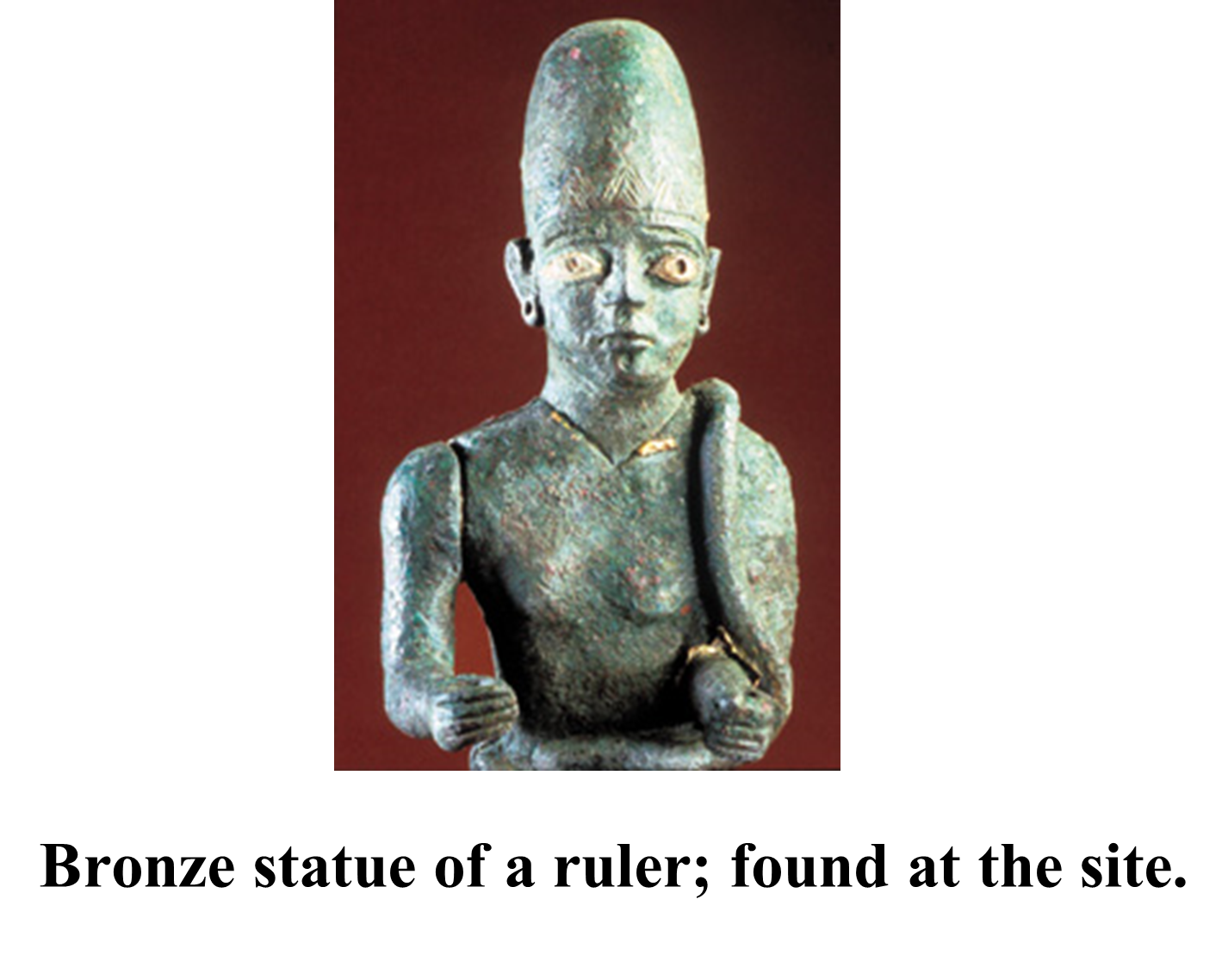 When the ceremonial palace was later found it was discovered that a large amount of wood was used to construct the roof and the floor and close to 1,000 gallons of olive oil was stored there. This with the strong winds would have made such a fire.

JOS 11:12 And Joshua captured all the cities of these kings, and all their kings, and he struck them with the edge of the sword, and utterly destroyed them; just as Moses the servant of the Lord had commanded.

JOS 11:13 However, Israel did not burn any cities that stood on their mounds, except Hazor alone, which Joshua burned.

Only Hazor, the leader of the confederation opposing God will be burned (all things under the ban) and the remaining towns will be given to Israel (only the people under the ban).

The two greatest cities in Canaan, Jericho and Hazor, were but under the complete ban and completely burned. There are many things that God does in the conquest of Canaan that symbolize His power over evil and all that opposes Him. This includes discipline upon Israel, which will soon come due to her rejection of the Law and her turning to idol worship.

JOS 11:14 And all the spoil of these cities and the cattle, the sons of Israel took as their plunder; but they struck every man with the edge of the sword, until they had destroyed them. They left no one who breathed.

The account of the wars of Joshua is brought to a close, and the way opened for proceeding to the concluding remarks with reference to the conquest of the whole land (vv. 16-23).