We saw last night that the reward in the test is the test itself. Paul gloried in the test or weakness. In the test, the power of God will shine and bring victory. Victory isn't the test being over but being content and at peace in the test.

The battle first begins in the believer's soul and that's where it is inevitably won. Will we have courage through faith and will we stand firm adorning the full armor of God?

The gift to David, in all of it, is the actual battle where his courage can be put to the test and proven. Without the test, who would know of it? Even for David, would he have surmised the power of faith by tending sheep or by killing the bear and the lion, and then, in one of the most epic battles of history, certainly the shortest of the most epic battles, by defeating the loud mouthed giant?

1PE 4:12 Beloved, do not be surprised at the fiery ordeal among you, which comes upon you for your testing, as though some strange thing were happening to you;

"fiery ordeal" - pu,rwsij [purosis] = to set on fire. God allows the fire so that we can prove [testing = dokimazo] His surpassing power. The fire is the reward.

1PE 4:13 but to the degree that you share the sufferings of Christ, keep on rejoicing; so that also at the revelation of His glory, you may rejoice with exultation.

"revelation of His glory": 1) the understanding of the opportunity of the trial and the way of victory; 2) the bema seat of Christ where it is evaluated.

1PE 4:14 If you are reviled for the name of Christ, you are blessed, because the Spirit of glory and of God rests upon you.

The Spirit rests upon you whether you are reviled or not, so it is the reviling that is the blessing, since in it, the power of the Spirit is deeply revealed to you.

1PE 4:15 By no means let any of you suffer [deservedly] as a murderer, or thief, or evildoer, or a troublesome meddler;

1PE 4:16 but if anyone suffers as a Christian, let him not feel ashamed, but in that name [at the time a reviled name] let him glorify God.

In verses 40-41 the writer summarizes the whole southern campaign.

JOS 10:40 Thus Joshua struck all the land, the hill country and the Negev and the lowland and the slopes and all their kings. He left no survivor, but he utterly destroyed all who breathed, just as the Lord, the God of Israel, had commanded. 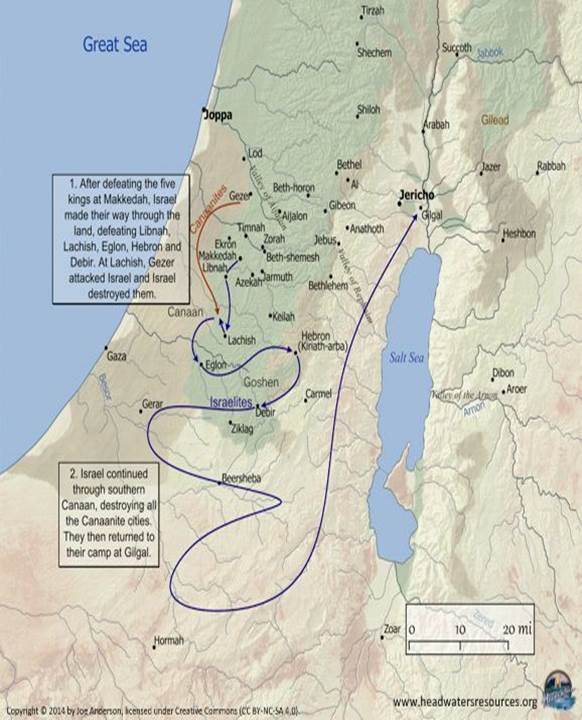 JOS 10:42 And Joshua captured all these kings and their lands at one time, because the Lord, the God of Israel, fought for Israel.

JOS 10:43 So Joshua and all Israel with him returned to the camp at Gilgal.

Again, the campaign would have taken over a year. We are not given the timeline, only that we know from chapter 11 that it took a long time, and all in all, it took seven years to accomplish it.

We should not be in too much of a hurry to end our battles. Israel got in more trouble in peace time then they did during the conflict.

I know how much easier that is to say than to perform, but it is none the less a very real truth. We are not to be in the business of finding ways to end the trial in a quicker manner, nor are we to determine how to extend it, which amounts to nothing more than asceticism. God will determine the time. The principle here is about our mental attitude when we are in the trial. It is a priceless opportunity which is drawing us into a closer walk with God. There is no need to rush.

JOS 11:2 and to the kings who were of the north in the hill country, and in the Arabah —  south of Chinneroth and in the lowland and on the heights of Dor on the west [settled because of its large amount of purple mussles] —

JOS 11:3 to the Canaanite on the east and on the west, and the Amorite and the Hittite and the Perizzite and the Jebusite in the hill country, and the Hivite at the foot of Hermon in the land of Mizpeh.

The alliance is formed by the king of Hazor since it was the head of all the northern kingdoms of Canaan. Hazor was captured and burnt to the ground by Joshua, but it was afterwards restored as a capital.

Canaan had been a tributary of Egypt in the past, meaning that they possessed independence but paid tribute to Egypt, but never was the whole area conquered in this fashion by one people. Indeed unique, Israel is a nation without a land, but promised a land by God. This has never happened and would never happen again. The kings of the north are far more powerful and formidable than the ones in the south and they are terrified of what they assume to be coming their way. But since it is the will of God, no matter how many kingdoms they can pull together, they cannot stop it. As with the anti-Christ during the Tribulation, no matter how many nations he manages to put under his grand confederation, he will not be able to still God's hand of judgment.

Jabin assembles an enormous army. It is probably the largest one ever assembled by these peoples. Josephus states that the Canaanite army was comprised of 300,000 armed footmen, 10,000 horsemen, and 20,000 chariots. These numbers cannot be substantiated, but with so many kings making up the confederation, they are not absurd.

JOS 11:4 And they came out, they and all their armies with them, as many people as the sand that is on the seashore, with very many horses and chariots.

JOS 17:16 and JUD 4:3 tell us that the chariots are made with iron. Archaeology informs to us that smelting iron was practiced in this area as early as 1500 B.C. These chariots would have been made of wood and tipped with iron for strength and durability. The earliest reference to the use of chariots is in this area (Syria) around 1800 BC according to the Ancient History Encyclopedia. Hence, by this time, around 1400 BC, they would have been expert chariot riders, using the compound bow from the platform, weaving in and out of battle, shooting from long distances with accuracy. Thousands of such chariots would have been an army that Israel had never seen.

JOS 11:5 So all of these kings having agreed to meet, came and encamped together at the waters of Merom, to fight against Israel. 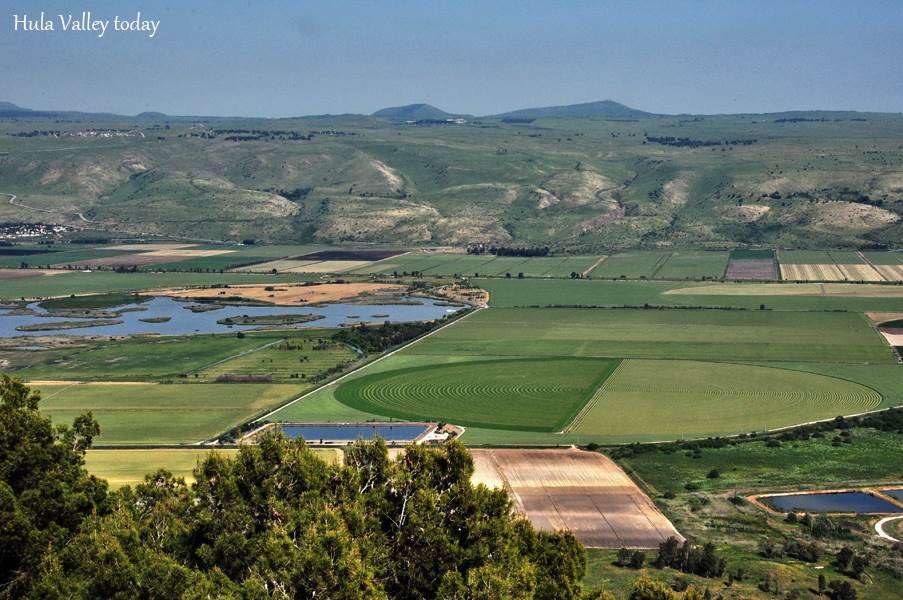 Today this area is called the Hula Valley. Hula lake is a freshwater lake through which the Jordan flows, which makes the valley lush and green.

One needs flat terrain for chariots to be successful so this valley is a natural choice for this army under the king of Hazor. We would imagine that they have trained their chariot riders in this valley, since it is in the shadow of Hazor, giving the riders knowledge of the entire terrain. This place is a huge home court advantage for the northern confederation. We can be sure that they have a level of confidence.

JOS 11:6 Then the Lord said to Joshua, "Do not be afraid because of them, for tomorrow at this time I will deliver all of them slain before Israel; you shall hamstring their horses and burn their chariots with fire."

"As there was so much more difficulty connected with the destruction of so populous and well-disciplined an army, it was all the more necessary that he should be inspired with fresh confidence. For this reason God appeared to Joshua, and promised him the same success as He had given him so many times before." [Calvin]

Joshua was never to estimate the outcomes of any of the battles he faced by comparing the strength of the enemies army with his own. God will perform these things.

God's promise is much like the promises given on the eves of the other battles, but this time the specifics are given to make their horses lame and to burn their chariots.

One may wonder why God did not allow them to take their horses and chariots and incorporate them into their own army. The answer is obvious.

God does not need the weapons of man to give victory to His elect people. They were not to take their horses and chariots, but to destroy them as a testimony to what happens when man opposes God with his own strength.

To hamstring the horses they would have to cut the sinews of the rear hoof. This not only lamed them, but rendered them utterly unfit for use, since the sinew, once severed, can never be healed again, and as a rule the arteries are cut at the same time, so that the horses bleed to death.

JOS 11:7 So Joshua and all the people of war with him came upon them suddenly by the waters of Merom, and attacked them.

Despite the enormous army and the many chariots, the Israelites do not hesitate. Their faith in God's promise has given them courage.

JOS 11:8 And the Lord delivered them into the hand of Israel, so that they defeated them, and pursued them as far as Great Sidon and Misrephoth-maim and the valley of Mizpeh to the east; and they struck them until no survivor was left to them.

JOS 11:9 And Joshua did to them as the Lord had told him; he hamstrung their horses, and burned their chariots with fire.

Joshua did all that the Lord had told him.