JOS 8:30 Then Joshua built an altar to the Lord, the God of Israel, in Mount Ebal,

JOS 8:31 just as Moses the servant of the Lord had commanded the sons of Israel, as it is written in the book of the law of Moses, an altar of uncut stones, on which no man had wielded an iron tool; and they offered burnt offerings on it to the Lord, and sacrificed peace offerings. 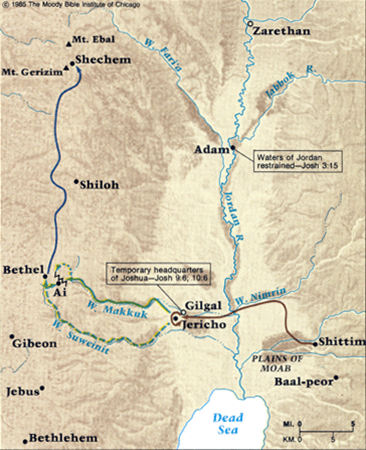 Directly after their victory at Ai, Joshua took the people to Ebal and Gerizim.

As an aside, it is often remarked in our day that all religions are the same and that the spread of Islam by means of the sword is the same for Israel here in Canaan and for the church during the crusades. Is this an accurate conclusion?

DEU 9:4 Do not say in your heart when the Lord your God has driven them out before you, 'Because of my righteousness the Lord has brought me in to possess this land,' but it is because of the wickedness of these nations that the Lord is dispossessing them before you.

DEU 9:5 It is not for your righteousness or for the uprightness of your heart that you are going to possess their land, but it is because of the wickedness of these nations that the Lord your God is driving them out before you, in order to confirm the oath which the Lord swore to your fathers, to Abraham, Isaac and Jacob.

DEU 9:6 Know, then, it is not because of your righteousness that the Lord your God is giving you this good land to possess, for you are a stubborn people.

God is not making war against innocent people just so He can give land to His own. This is

not a Jihad. The people of this land have been exceeding wicked for centuries and their sin, which includes demon idol worship and child sacrifice, has come to the point of judgment. All nations [city-states] fall, and in this one instance in all of history, God is giving the land of the fallen, a land He has blessed with abundance, to His own nation.

In setting up the altar of stones on Mt. Ebal they are following the command of Moses. As on the east side of the Jordan, so on the west, the Law, the way of obedience, the blessing and the curse will be stated.

Moses summarizes the Law in his teaching Israel just before they were to cross the Jordan without him. This is recorded in the book of Deuteronomy. 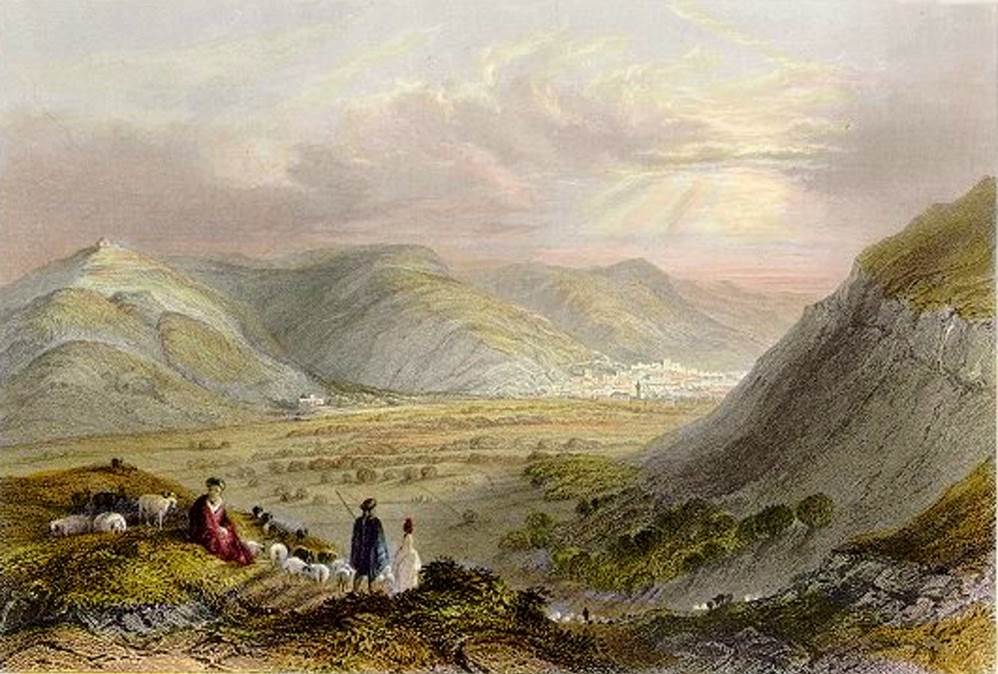 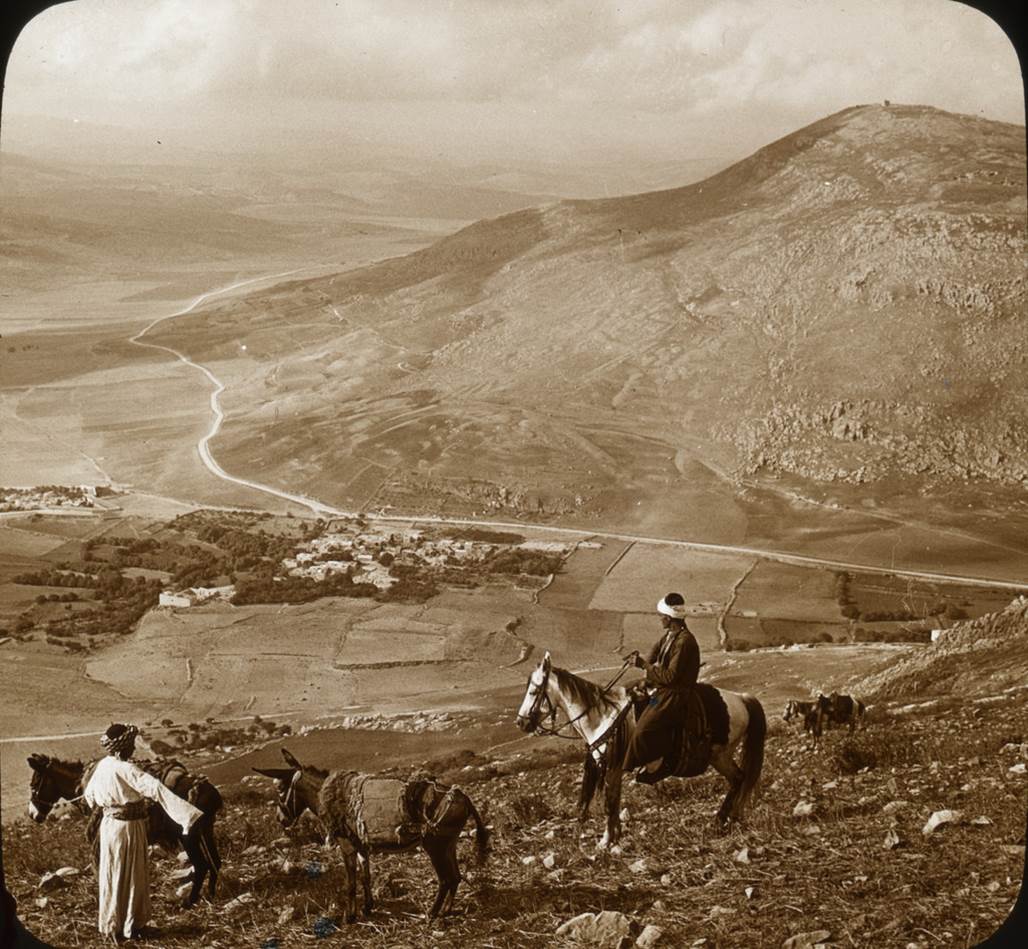 DEU 11:27 the blessing, if you listen to the commandments of the Lord your God, which I am commanding you today;

DEU 11:28 and the curse, if you do not listen to the commandments of the Lord your God, but turn aside from the way which I am commanding you today, by following other gods which you have not known.

DEU 11:29 And it shall come about, when the Lord your God brings you into the land where you are entering to possess it, that you shall place the blessing on Mount Gerizim and the curse on Mount Ebal.

DEU 27:1 Then Moses and the elders of Israel charged the people, saying, "Keep all the commandments which I command you today.

"All the commandments": from Deu 4 to here - they are all to be written on the stones of the altar.

DEU 27:2 So it shall be on the day when you shall cross the Jordan to the land which the Lord your God gives you, that you shall set up for yourself large stones, and coat them with lime

The stones were covered with lime or gypsum (plaster of Paris) and then written upon. This was commonly done in Egypt upon walls of buildings or monumental stones. Being white the people could easily see the altar. The writing was extensive and not meant to be visibly read by the witnesses who stood in the valley below, for it was read aloud by Joshua, but the writing on the white background could be seen (verse 8 instructs them to write clearly), signifying to the Israelites, burning a picture in their minds of what this altar represented.

DEU 27:3 and write on them all the words of this law, when you cross over, in order that you may enter the land which the Lord your God gives you, a land flowing with milk and honey, as the Lord, the God of your fathers, promised you.

DEU 27:4 So it shall be when you cross the Jordan, you shall set up on Mount Ebal, these stones, as I am commanding you today, and you shall coat them with lime.

The altar containing the Law was set up on Ebal - the mountain of the curse. The Law's curse was to reveal man as a born sinner.

It is significant that this was done after the victories over Jericho and Ai and not immediately after they crossed. The victory over Jericho was easy and quick. But with that victory came temptation, the temptation of riches that were found in that city, all of which was put under the ban. Achan fell for the temptation and his sin caused the initial assault on the city to fail miserably. Achan had to be discovered and the himself and the things he stole from God cursed. He violated the Law of God and the curse was pronounced upon him. Now, after this sobering fact is firm in the minds of the people as well as the picture of victory over two cities that they had no business defeating but did by the grace of God, the blessing and the curse is pronounced to them along with the entire Law.

Not long before Moses stated that the Law was to be written all around them, but with the focus on love for the Lord.

DEU 6:6 And these words, which I am commanding you today, shall be on your heart;

DEU 6:7 and you shall teach them diligently to your sons and shall talk of them when you sit in your house and when you walk by the way and when you lie down and when you rise up.

DEU 6:8 And you shall bind them as a sign on your hand and they shall be as frontals on your forehead.

DEU 6:9 And you shall write them on the doorposts of your house and on your gates.

The Law was to be written all around them and they were to observe it, but they would inevitably break it and find themselves standing on Mt. Ebal, standing in the midst of the curse.

The curse of being a  law-breaker was to awaken a desire for the Messiah, and hence the whole Law is summed up in the command - Love the Lord your God with all your heart, soul, and might.

My revelation of myself as a law-breaker awakens in me the need for a Savior and God the Holy Spirit presents that one and only qualified Savior to my mind's eye. He does this for everyone and I am to look to Christ Jesus and see my deliverance. Knowing Him and His sacrificial work for me will cause love for Him to be realized through the love He has for me.

hope does not disappoint, because the love of God has been poured out within our hearts through the Holy Spirit who was given to us.

We see this pictured beautifully in the next instruction. There was another altar to be built for the blood offering, both the burnt offering and the peace offering. These offerings would not be offered on the altar upon which the Law was written, but on another altar made of stones that were not to be manipulated by human hands in any way, for this altar belonged to the earth and it must be made of unaltered earth.

DEU 27:5 Moreover, you shall build there an altar to the Lord your God, an altar of stones; you shall not wield an iron tool on them.

If the stones had been cut they would have not represented the earth, EXO 20:24. Earth = the curse of sin and death, GEN 3:17-19 "cursed is the ground because of you."