Vs. 5 - I had glory with You before the world was.

Vs. 6 - The believer is given to Him out of the world - He prays for them but not the others who need the gospel.

The world is not needed for God's glory since They possessed it before the world. This glory is given to the ones who are called out of the world through their personal faith in Christ. He prays for them since the unbeliever is in need of the gospel that they carry. How beautiful are the feet of them that preach the gospel of peace, ROM 10:15.

He could have prayed that we escape the world but we are to remain in it but not be overcome by it as we are kept from evil. While we remain in the world if the joy of the Lord fills us it will be like we are already in heaven.

Vs. 14 - The world hates them because they are not of the world as I am not.

In the world you will have tribulation, but take courage, Christ has overcome the world, JOH 16:33. The reason the world hates the positive believer is because he exposes its lies and hypocrisy and doesn't condone her practices by participating in the same. Their conscience will either lead them to believe the gospel or hate the believer and the message.

We are given to Christ out of the world and then sent right back in so that we may testify of Him and release more of the captives. We are not selective in this since He atoned for all of them as He has done for us. He is the Savior of all mankind. The Father sent the Son because the Son had every potential to fulfill the Father's plan. Now we are sent, which means that we each have every potential to fulfill the Father's plan through the grace gifts given to us.

Vs. 23 - I in them and You in Me - so that they are matured in unity - so that the world may know that You did love them as You have loved Me.

The love of the Father and the Son involves the most cheerful intimacy. This love between believers will motivate them to work together cheerfully like the fisherman pulling in the bursting net of fish. The Lord does the work of the miracle and we have the fun of harvesting it.

Vs. 24 - You did love Me before the foundation of the world.

God's love is eternal and does not change. This love of the Son is due to who the Son is and He doesn't change. Now this love is for us because we are in Him and that will not change.

Vs. 4 - I have accomplished the work and glorified you.

God so loved the world, the people in it, that He gave His only begotten Son. The Son, in full agreement with this, finished the work that the Father ordained for Him.

He is sent into the world to accomplish the Father's purpose, He did so, and now it is time to return home, and for the first time, home in His humanity in resurrection. By finishing the work He is exalted to the highest position of authority and even this He does not hoard for Himself but desires for us to be with Him there. Meet Me at the right hand of God.

These things, beyond what we could have ever seen, heard, or imagined, He asked for each of us and the Father grants all His requests. Take comfort in the fact that Jesus Christ has prayed these for you and continues to pray for you from the Father's right hand.

JOH 18:1 When Jesus had spoken these words, He went forth with His disciples over the ravine of the Kidron, where there was a garden, into which He Himself entered, and His disciples.

JOH 18:2 Now Judas also, who was betraying Him, knew the place; for Jesus had often met there with His disciples.

The Garden of Gethsemane: 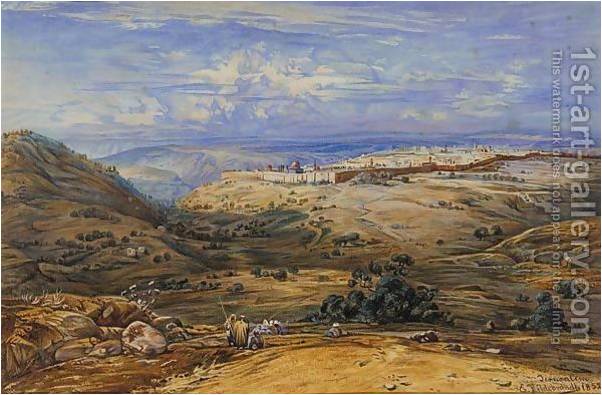 When Jesus left the upper room He leads His disciples out of the city eastwards down into the Kidron valley and up the other side. The ravine that makes the valley is dry most of the year but is a torrent during the rainy seasons. The bottom of the valley is over 200 feet below the platform of the outer court of the temple. East of the valley rises the Mount of Olives, on the lower slopes of which was the garden to which Jesus sand His disciples frequented on the nights they were in Jerusalem and Judas was with them. They likely went there every night during this week and this would be His last time. When Judas lead the cohort of Roman soldiers and temple guards they likely first went to the upper room only to find it empty and so Judas would have led them to the garden. Jesus made no attempt this time to hide from His enemies as He did in the past. His hour had come and there was no use in hiding.

Gethsemane = oil press. Our Lord will face His ultimate pressure.

There was likely a variety of fruit trees and flowering shrubs. The moon would have been full as it was Passover. It is somewhere around midnight or 1am. He has already communicated to the disciples the prophecy that the sheep would scatter and leave Him. In fact, the college of the apostles was broken up and the bond of the apostles would not be restored until after His resurrection and appearance to them. After His resurrection He met with Peter alone and then with some others with the absence of Thomas. They were uncertain as the disciples on the road to Emmaus shows us. At the Sea of Galilee there were only seven of them fishing and only after that did the eleven of them meet Him on the mountain in Galilee to which He directed them. Now reformed together He sent them to Jerusalem to await the final events of His ascension and the coming of the Holy Spirit.

In the Garden we have most prominently the actions of Jesus, Judas, and Peter.

The Lord spoke to Peter individually before this:

LUK 22:31 "Simon, Simon, behold, Satan has demanded permission to sift you like wheat;

LUK 22:32 but I have prayed for you, that your faith may not fail; and you, when once you have turned again, strengthen your brothers. "

LUK 22:34 And He said, "I say to you, Peter, the cock will not crow today until you have denied three times that you know Me."

As with Job Satan needed permission and it was granted him. The fierce wind of darkness was allowed to sweep unbroken over our Savior and to extend its fury upon Peter. Satan was not given permission to destroy Peter but to sift as wheat which is to put in a sieve in order to cast out that which is not grain.

Peter said that he was willing to go to both prison and death for the Lord. Likely this was on his mind when the Roman soldiers and temple guard laid hands on Jesus and Peter leapt into action with his sword. This took guts. Malchus was the leader of the temple guard and he was surrounded by seasoned killers in the Roman cohort. He likely remembered this when after he first ran from the garden with the others that he turned back and with John followed the Lord at a distance, ending up at the palace of the high priest where Jesus was being tried. Satan chose not to have Peter arrested in the garden for his attack or to prevent him from following Jesus to the house of the high priest. Satan likely knew that these things might increase Peter's resolve rather than cast it away like chaff from the sieve. Satan had a better plan to remove Peter's love for his Lord.